Maria Grazia Chiuri's collection was a minor masterpiece of almost monastic restraint in its muted colour palette and its rigorous, repetitive silhouettes. 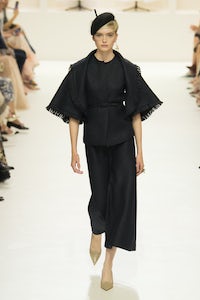 Maria Grazia Chiuri's collection was a minor masterpiece of almost monastic restraint in its muted colour palette and its rigorous, repetitive silhouettes.

PARIS, France — There’s a skew-whiff spark of feminist defiance smouldering in Maria Grazia Chiuri’s bosom. I can’t think of any other designer who would feel comfortable referring to haute couture as “a psychological place of female resistance.” But her yen to resist convention took a turn for the surreal with the collection she showed on Monday. Surreal? No, that was last season. Now it was the avant-garde that Chiuri was invoking in her show notes. She said she’d been thinking long and hard about the meaning of couture, and the function — and future — of luxury, and she’d come to a provocative conclusion. Couture is circumscribed by a clear set of rules established by the Chambre Syndicale de la Haute Couture, the governing body of the French fashion industry. At the same time, couture is supposed to offer a designer complete creative freedom. In the encounter between the two extremes, Chiuri said, “couture becomes akin to rebellion.” Ergo, avant-garde.

If you quickly scanned the 71 looks she offered, you’d probably think, “Rebellion? I don’t see it.” That’s because the collection was a minor masterpiece of almost monastic restraint, in its muted colour palette (the dominant shade? “Nude”) and its rigorous, repetitive, nipped-waist-full-skirted silhouettes. Nothing about the clothes screamed INSTAGRAM ME NOW. Instead, they were like a style bulletin from a prelapsarian era, before the ravening maw of social media swallowed subtlety whole and spat it out as LIKES, when it was Avedon and Penn taking the pictures, rather than a thousand mobile phones held high.

This was quite deliberate on Chiuri’s part. She was engaged by the notion of a couture that was so minimal — her most minimal yet, she acknowledged — that it would scarcely be visible in pictures, even as it involved levels of handwork that were numbingly intense. There was, for instance, a dress in floral velour based on a Gobelin tapestry that had been entirely worked by hand. Even I, with my limited conception of the intricacies of velour, could feel the obsessiveness of that. In the same breath, Chiuri mentioned cuts so precise, structure so intangible that they would only be possible in couture — and invisible to the untrained eye, unlike ready-to-wear which was, she said, “so impactful, so visible, so now. Couture has another perception of time, three…four months. It can’t be reproduced, and it’s important for people to understand how specific it is.”

Defying social media? Does Chiuri have a death wish? Or was she simply taking haute couture back to its dreamy ground zero of a purely private pleasure? The traditional notion of the relationship between designer and client resonated with her. “The human touch,” she called it. Her mood board was covered, one way or another, with photos focussed on the hands of creative people: sculptor Camille Claudel shaping a piece, Virginia Woolf and Mozart sitting at their desks, a woman weaver at the Gobelin factory, as well as the female artisans in couture ateliers. Chiuri’s bible for the collection was Elisabetta Orsini’s “I luoghi del pensiero e della creazione” (“The Places of Thought and Creation”), a photo book about artists’ spaces. “The atelier is a personal space where an artist plays,” she mused. ‘Where they create — and destroy.” She claimed that was just how she felt about Dior’s fabled couture atelier. The walls of the show space were lined with white toiles, ghosts from the atelier, hovering over the presentation.

Their presence loaned an exhibition wraparound to the show (the same effect was used in Christian Dior: Designer of Dreams at the Musée des Arts Decoratifs last year). Couple that with Chiuri’s promotion of the invisible magic of haute couture and you scarcely had a formula for fireworks. But that wasn’t what she wanted, was it? If the serious caped jackets, the mid-calf skirts, the pallid plissés and sunray-pleated dance dresses flirted with dull, Chiuri had something deeper, more reflective on her mind. And she was confident her women would understand.