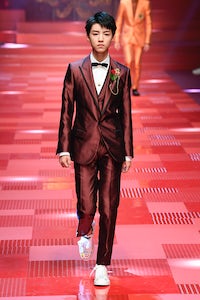 MILAN, Italy — The model Marpessa was sitting in the front row of the Dolce & Gabbana show on a sunny Saturday afternoon in Milan. She was the face of some of Domenico and Stefano’s earliest campaigns, the physical embodiment of the moody, mysterious Sicilian ethos that marked the duo as fashion’s future in the mid-80s.

Then, it all came so naturally to them. But now, on their runway for Spring 2018, they seemed to have lost that ineffable instinct. Where once the future came to them, here they were chasing it, crowding dozens of millennials onto their catwalk. Many of the models arrived with “celebrity” attachments, some (Son of Snoop Dogg! Son of Pierce Brosnan!) more credible than others (Nephew of Bill Clinton! In-law of an In-law of the British royal family!).

That would suggest a sense of humour in whoever cast the show, but at least give them credit for casting their net commendably wide, to all corners of the globe. The diversity was astute in that most of the picks had impeccable social media credentials, the numbers of Instagram followers helpfully listed in a 13-sided crib sheet that was provided to the press. Otherwise we would never have known that Thai model Mario Maurer has 5.5M followers. Or Mexican influencer Juan Pablo Zurita has 10.6M. Or Princess Maria-Olympia of Greece and Denmark has 104K. Colour me read in digital reach.

The diversity meant we saw all sorts on the runway, the godlike paragons of beauty from ye olde Dolce (not just Marpessa but Arthur Kulkov and some of his male catwalk cohorts were also front row) shunted into the past by the farrago of short-ish millennials. Unfortunately, that only served to underscore that, if professional models are mere walking coathangers – as the industry’s critics would have it — they can sure as hell carry off clothing better than amateurs.

Domenico and Stefano’s thrall to millennials has ensured this state of affairs for several seasons now. Once, they had their signature collection and the D&G range, a big-sibling-little-sibling situation. Then they amalgamated the two. But now it feels like a divide has opened again, between the sophistication of Alta Moda for women and Alta Sartoria for men (shown on Friday night in a distinctly more rarefied environment) and the collection that once upon a time was the fashion powerhouse’s calling card to the world.

On Saturday, it looked like kids playing dress-up: teetering teenage girls in Sicilian widow’s weeds, boys in 50’s baseball shirts or prom suits in tonic fabrics. They wore crowns too, prom kings and queens. One charitable interpretation was that this was the designers’ tip of the cap to the birth of teenage (James Dean, the 1950s, blah blah) but that hardly seemed like something for which you’d come to a house with Dolce & Gabbana’s heritage.

Of course, I could be totally wrong. This whole shtick might be playing gangbusters with the cumulative millions who follow Saturday’s cast of characters. Maybe they’re following their faves straight into the nearest Dolce & Gabbana boutique. But it wasn’t just the models. The whole collection felt dangerously narrowcast. It’s not the first time in their careers that the designers have pulled focus in favour of one particular notion, but this one has been running for a while now. Time to say Basta!