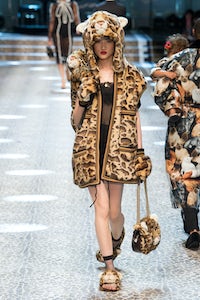 MILAN, Italy — It was so folksy. Mum, dad and the kids. And Grandma. And cousins. And then, everyone you’ve ever met, sashaying down the Dolce & Gabbana catwalk in outfits plucked from a dress-up box of more than three decades’ worth of clothing designed by Domenico and Stefano. So what could you say about the “collection”? Very little that could compete with the event itself.

It was a bit like a school pageant, the front row glowing with proud parents Pamela Anderson, Christie Brinkley and Rene Russo, all lit up as the fruit of their loins paraded past in their Dolce finery. That’s what happens with D&G — temperatures rise. But in this climate, the designers’ all-embracing shtick had a sting: their catwalk was alive with diversity, sizes, shapes, ages, races.

There’s a very good chance that Donald Trump and/or his flying monkeys might have had occasion to wear Dolce & Gabbana in the past. This was a salutary reminder about how, why and where the collection took shape, in the fearless crucible of the outsider sensibility.

Mea culpa — I’m adding a contrary gloss to the mainstream extravaganza the designers actually staged. Oleaginous tween idol Austin Mahone crooned and slithered around the tribe that marched the runway. His constituency was bending the barricades outside the Metropol, the old theatre where Dolce & Gabbana shows. That was surely the point. Social media, with all its ravening reach.

Journalists were given a crib sheet of the dozens of “personalities” walking in the show. A significant number of them were children-of, same with the men’s show in January. But it took a certain creativity to corral Viva, daughter of Depeche Mode’s main man Martin Gore, or Destry Allyn Spielberg, obvious offspring of you know who. They weren’t professionals, which added a gawky charm to the presentation.

Toddlers tottering down the catwalk with their mothers; teens stiffened with self-consciousness; game, glittery old birds loving their moment in the spotlight… it was a panoply. Was it a political statement? Any celebration of wanton diversity takes on a different caste these days. But what made Domenico and Stefano’s celebration even more enjoyable was that there were people in the audience only too happy to dish about some of the characters on the catwalk. The natural human instinct to undermine will eventually see all the villains off the global stage.