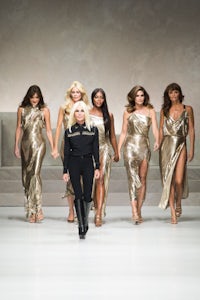 MILAN, Italy — Before her blinder of a show at the Triennale Museum on Friday night, Donatella Versace had a few journalists in for a chat. It’s been twenty years since the murder of her brother, and those decades have been a very public journey for Donatella, through every self-flagellating stage of mourning, anger, denial, ravening insecurity and, finally, acceptance. “I never had the courage to go there before,” she admitted, as she reflected on a collection which marked Versace’s darkest day with an uplifting celebration of everything her brother accomplished. Upbeat, yes. Nostalgic, no. “Yesterday I cried,” Donatella said. “Today I won’t.” And then she said something that completely clarified why the show was a wonder. “This is a chance for a new generation to see what Gianni was about.”

The snippet of footage which shows Linda, Naomi, Christy and Cindy lipsynching to George Michael’s "Freedom 90" for the finale of Gianni's Fall '91 show is one of those wish-you’d-been-there moments that haunts fashion fanatics. You can never go back, but Donatella managed to capture the same lightning in a bottle with her finale on Friday. The curtains at the end of the catwalk parted to reveal Claudia Schiffer, Naomi Campbell, Cindy Crawford, Carla Bruni and Helena Christensen posed in classic Versace chainmail dresses, like one of the tableaux that Richard Avedon created for his iconic early-90s advertising campaigns for the brand. Then the models joined Donatella on the catwalk, while "Freedom 90" played. "Nothing had changed," Donatella said with a laugh. "It was the same competition. 'I want to be in the centre', they all said. So there were five people in the centre." But there was really only one, and that was Donatella. It was so BEYOND and MAJOR and GAGGING and whatever other fashion superlative you care to hurl at the spectacle that you could practically feel the transcendence in play.

It’s taken so long to get to this point. Donatella was shy of the legacy. Who wouldn’t be? You want to stand alone, be judged on your own merits and it took her a long time to find her way. But now she has. Over the past few seasons, it’s become increasingly clear that Donatella has developed a Versace aesthetic which is her own. And that was the confident platform from which she could finally approach the past.

If the collection wasn’t exactly Gianni’s Greatest Bits, it came very close. The biker collection, the bondage collection, the Warhol Marilyn and James Dean bodysuits, the crystallised Vogue covers, the rococo printed silks in flippy pleated skirts and casually knotted shirts and matching leggings, the denim shirt with the huge balloon of silk, the butterflies and the visage of Elton John…good lord, it was like a thousand fashion editorials sprung to vibrant life. Kaia Gerber found her mother Cindy’s face on one of those Vogue covers. But times have changed. The clothes now moved differently from the clothes then. Donatella said everything was much more constricting 20 years ago. And even if there was a lot of re-editioning, she insisted that the silhouettes were different, all except the strong shoulder from Gianni’s very last collection, where he was clearly crossing new design frontiers. How will these apogees of early-90s style look to an audience 25 years later? Fan-bloody-tastic, if only everyone can come to their senses.

When she was asked what she felt her brother’s influence on young designers now might be, Donatella answered , "The courage to dare." Hindsight doesn’t really supply much sense of how audacious his clothes were in their time, but Donatella’s salute reanimated them in such a way that the new generation she talked of could at least grasp some sense of their exuberant don’t-give-a-fuck quality. On the pulsating clubby soundtrack, the Portuguese DJ Violet intoned, "Because of you, we’re not afraid." The words were Donatella’s, straight from the heart. But the presence of Alessandro Michele, Anthony Vaccarello and Pierpaolo Piccioli in the front row gave her sentiment a much wider resonance.