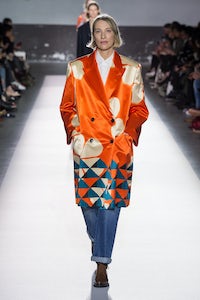 Everywhere, there were women reconnecting after decades apart. They’d been living their lives, raising their families. Some were still modelling, most were following other dreams… then Dries called and asked them back to help celebrate his milestone. Balfour travelled the farthest, from her home in Sydney, but there was a strong contingent from the US and Canada: the peerless Kirsten Owen, Guinevere van Seenus, Tasha Tilberg, Trish Goff, Carolyn Murphy, Michelle Hicks.

Liisa Winkler brought her daughter, a perfect little facsimile. Alek Wek has been on catwalks recently, but how long is it since we’ve seen Debra Shaw? Or Cecilia Chancellor? Sam McKnight had tears in his eyes as he remembered the first time they’d worked together. Could it have been the early 1980s? That was the emotional undertow of this show. Everyone had come together to mark Van Noten’s 100th, but it was also a moment to remember all their own good times.

The fact that this joyous “family” gathering came in the same week that the cavalier treatment of young models has once again surfaced as a serious issue in the fashion industry was also a reminder that there is no need for things to be that way.

But this was no Golden Girls nostalgiafest. Van Noten has set the bar extremely high for himself with his presentations. The one that marked his 50th show, for instance, featured a runway show staged down the middle of long tables at which the audience was seated, eating dinner. Not a glass knocked over, not a plate dislodged. Remarkable! He didn’t want to go that route this time. “Maybe people will be disappointed that there aren’t moving chandeliers, but fashion shows have become such extravaganzas, moving icebergs, shipping everyone to Cuba or Rio, that I thought for Number 100 we would go back to a very simple, bare venue. Just light, sound and models, the women who have meant something to us over the years.”

Van Noten might have added purest emotion to that list. The collection he showed distilled the style that won hearts and minds decades ago. “Menswear as we always do,” he said. “We exaggerated some volumes, but the shapes are quite basic, very comfortable, more daywear than ever.” Translate that as fabulous coats, pleated, roomy trousers, jackets to match.

As for the prints that are a DVN signature, with 50 women’s collections to draw from, it was obvious that a revisit was in order. Van Noten wanted to honour his past but he also wanted to sidestep any sense of nostalgia. So he modernised and unified his selection by overprinting bold, graphic motifs, big yellow and blue circles, or orange and green triangles, like patterns from a Sonia Delaunay print. They were, as ever with DVN, the eccentric counterpoint to the tailoring, the flaming orange to the sober navy. And they highlighted a particular sly talent of Van Noten’s, perfected this past quarter century. He is the very measure of sobriety and restraint in person, but in his clothes the undercurrent of decadence runs thick and slow.

Mica Arganaraz, flying the flag for the younger generation, made her final smouldering sashay in bronze velvet, swathed in magenta fur. Antwerp, Van Noten’s homebase, was once the centre of the world, civilized and less so. All forms of life were collected there by connoisseurs of the exotic. Dries carries their flag in fashion.

And he understands that’s more important than ever. “I have an international team working on the collection,” Van Noten said. “We stand for diversity and we speak to a lot of different women. I don’t want to make a political statement with our clothes. It’s the person wearing them who does that. The mind is more important than a slogan on a t-shirt. But with what’s happening in the world, you’re pushed to think about everything: what are the new values of fashion, what’s important to us in this collection, how can you use fashion and clothes to tell something about yourself and how you feel.”

So the show he staged on Wednesday afternoon, however stripped back he imagined it to be, carried a huge weight. My own particular obsession led me to focus on the aural accompaniment. Van Noten’s soundtracks have always been an integral part of his presentations. For his 100th, he commissioned a soundscape, an aural collage, snippets of old soundtracks interwoven with music that in some way referenced Pina Bausch, the late German choreographer who is, he said, “very present in my way of thinking.”

To choose just one example, from the close of the show: David Bowie’s voice singing Heroes (the soundtrack of Show 76, Winter 2011) unaccompanied, poignantly alone, slowly merging with a heartbeat as the last of the models left the catwalk to line up with the other women. And finally, all that remained was the heartbeat, the human pulse, echoing against the mirrored walls as waves of applause built, and tears began to flow.