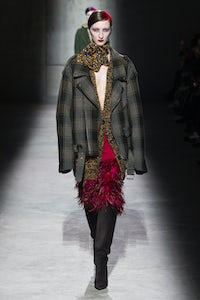 PARIS, France — Are we under siege? Fires there, floods here, the media a drumbeat of chaos and confusion. You leave home for Milan and Paris, as per usual, and a week later, you’re contemplating quarantine. The butterfly effect is real.

And where does this leave fashion? Dries Van Noten gave us a suggestion of an answer last season when he collaborated with Christian Lacroix on a collection that sent the industry into an exultant tailspin. Van Noten was clearly still high on it with his last show for men in January, and with its companion for women, shown on Wednesday. Still, the exultant mood, still, the sheer joy in shrieking glamour. It’s not been Van Noten’s way to stick with a theme like this, but it’s obviously touched a nerve. Lacroix taught him to dare. Sam McKnight’s slicked hair, with its immaculately feathered colour, and Inge Grognard’s makeup both reflected the icy perfection of Serge Lutens’s ad campaigns for Shiseido in the 1980s, when the world was full of fashion kids who were probably as obsessed as Van Noten was with Lutens. All he had to do on Wednesday was offer clothes that held their own against such perfection.

This he duly did. History was made at night for all those kids, heading out to clubs. Van Noten namechecked The Mud Club and the Camden Palace in London, but the party was everywhere, and dressing up was life. If he had specific people in mind, he wasn’t telling. Anyway, the fierce contrasts – matt and shine, blanket check and feathered flapper skirt, black Perfecto with lamé pajama pants, tropical print vs latex floral, stiletto and platform, the clashes of casual and glam in a luridly saturated colour palette – were an extravagant re-vision of the opposing dialogues that often define Van Noten’s work.

But between last season and this, the world looks like a darker place. It puts me in mind of an episode from Lacroix’s career. In 1987, with the world teetering on the brink of financial collapse (a different sort of abyss), he took his couture show on the road to New York. The headline of New York Magazine’s cover story was “Dancing on the Lip of a Volcano.” Now, it reads like another reminder that throughout history there have always been Bright Young Things who flared in the face of prevailing gloom. “Divine decadence, darling,” Sally Bowles bubbled as Weimar crumbled. Though I never thought I’d live to see Dries Van Noten as its avatar, I’m thankful for small miracles.