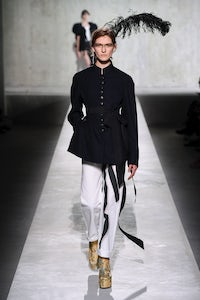 PARIS, France — “I wasn’t so useful,” jokes Christian Lacroix. “I didn’t do one sketch. Everything was there when I arrived.”

“Don’t believe him,” Dries Van Noten counters. “Knowing Christian would be coming in a week made us think in a different way. How would Christian look at this? What do we still have to add?”

And so did the most surprising partnership of Spring/Summer 2020 come to pass. After Van Noten’s decadent, dressed-up men’s collection for Spring, his mood board for womenswear was filled with a similar mood. Lots of pictures of 80s couture featured. “Lacroix was popping up all the time,” Van Noten recalls. “We thought, ‘Let’s send him an email and see.’” Lacroix said yes at once. “We had some territories in common, a way of mixing colours and prints. I’d always been jealous of him from the beginning.”

Lacroix’s shows in the late 80s and early 90s were the kind of events that fashion zealots wilt over. The music, the sets, the hair and makeup, the joie de vivre…and those dresses! But who knew that Lacroix himself was eyeballing Dries from afar? “He did all of that in a conceptual way, but it was never cold, never pretentious,” says Lacroix about Van Noten’s early collections. He insists he was never really a fan of other designers, but when he met Dries at a party celebrating the Belgian’s 40th show at L’Eclaireur, he collapsed into groupiedom. “Hello, I’m Christian Lacroix, I’m so happy to meet you.”

Van Noten was resolute about one thing. “For me, it was much more than an inspiration. It was really important it not become an homage. I wanted something really liberating. What I loved in Christian’s couture collections was the spontaneous creativity, the joy of putting things together.” He also didn’t want the idea of their collaboration to be presented as some kind of communication coup. “For me, it was very important that it was something between us two. It was just important that we were there and had the freedom to work without any pressure of how we could make it happen.”

So their first meeting took place on studiously discreet territory: the offices of Puig, Van Noten’s recent stakeholder, on the Champs Elysées. It was the day after the Gilets Jaunes had rioted down the street. There was broken glass everywhere. Fires still smouldered. “We were talking about frills and polka dots in a war zone,” says Van Noten. But, in a significant way, that environment reaffirmed his faith in the escapist core of his concept. “I’ve always said fashion is a reflection. Escapism makes you stronger to cope with everything that’s happening.” In his youth, he was entranced by glam rock, the glittering antidote to 70s hard times. Later, the New Romantics reacted to the aggression and darkness of punk with extravagant dress-up.

Working with Van Noten gave Lacroix a chance to see at close quarters how the Dries Ethos takes shape. “I loved the way he put it together, the place, the pianist, the alchemy.” The brutalist backdrop for the show was a cavernous concrete space that was originally intended as a second theatre for the Opera Bastille until they ran out of money. On every seat was placed a red rose, echoing the carnations which Lacroix placed on every seat of his couture shows, but also a reference to the poster for Stanley Kubrick’s “Barry Lyndon,” the black boot on the red rose. “These types of things I love to do,” Van Noten explains. “The small gestures which would be lost in the loudness of modern fashion are even more meaningful now.”

He ran a deliberately elevated catwalk through the space like a proper, old school fashion show. “You put models on a catwalk again, at a distance, and they become a kind of ideal. And then, with those kind of clothes, you can take the hair and makeup further.” That ideal was an edgy extravagance, a series of extraordinary contrasts: a sweatshirt vs. a furore of fuchsia-frilled pant, or white jeans and tank vs. a tuxedo jacket and a polka-dotted flamenco skirt.

It was too easy to say that the show was a face-off between a minimalist Belgian and a maximalist Frenchman. Van Noten has been as lavish as he’s been severe over the years. In Lacroix’s career, he was quite capable of leavening his couture with a t-shirt and jeans. So, from the first meeting in Antwerp in early April, their communication was actually forged in compatibility, not contrast. “There was a lot of work, and we’re both shy so we didn’t talk much,” says Lacroix. “We didn’t need words to connect. That was there from the first meeting,” adds Van Noten.

Initially, Lacroix said it with feathers. Van Noten showed him an outfit, big skirt in recycled polyester printed with an 18th-century pattern and a top printed in faux tiger. “Then Christian came in with the first feather, and then the second feather, and that was one of the first things we did. It opened Pandora’s box. It allowed us to do a lot more things. When you have two feathers in the hair, you make a pouf, you go to 50 metres of fabric, no problem. You start to see things bigger.”

“I was worried that it could be the nightmare of his life,” says Lacroix, even more when he saw the fuchsia and the bullfighter references that were among his signatures. “At the end of my house, I wasn’t doing that anymore. And I wanted this to be Dries Van Noten.” But, through whole days of fittings in Antwerp, he was taking pieces of fabric, considering volumes, offering opinions. “And the days he wasn’t there were even more important,” says Van Noten, “because we had to prepare things which were us but which had a place in his vision.”

Lacroix feels the collection benefits from being made without any of the fuss of couture. Technology makes luxury accessible. Real jacquards are scanned and printed on Tyvek and viscose. He’s amazed that everything is available in the showroom. “We used to do show pieces, or things that were just for private order, but here, everything exists at a good price, even the embroidered coats.”

Lacroix has acquired an ardent new following through social media. For instance, Van Noten’s team found the zingy ad for Lacroix’s 1987 perfume “C’est La Vie” on Youtube. “It makes sense, it’s aged well,” Dries claims. But the 80s were no lost paradise for Lacroix. He insists he hated them. “Bad taste, new money, vulgarity. And AIDS. Maybe we had this explosion of creativity because we had to face all our friends dying.” And his own experience with the fashion industry was ultimately hardly a happy one.

Van Noten agrees Lacroix was treated badly, but vindication was not the goal of this project. “Really my aim was to enjoy working with Christian. In one way or another, we’re all conditioned in this industry, and the way he thinks, the way he touches things, his spontaneity taught me again about pure creativity.”

Besides, Lacroix harbours no grudges.  He claims he never really had fashion in his blood, although he describes the ten years since he closed his business as purgatory, “between heaven and hell.” Only recently has his subconscious allowed himself to dream of his years in THE INDUSTRY. But he has no interest in coming back. “I’ve realised my childhood dream of working in the theatre. I’ve just been offered my first directorial job, Offenbach at the Theatre Champs-Elysees.” Still, after working with Dries, he adds, “I have a little regret that I wasn’t courageous enough to manage my name, not on a big scale like Bernard Arnault wished, but like Azzedine. But this has made me more conscious of what I did.”

“And how good it was,” Dries quietly interjects. From his own perspective, the collaboration has been inspiring. “Sometimes you need a little push over the edge. Christian made me jump. But only in the next seasons will I know what it meant. Maybe the most important thing I took away was how important it is to dare.”