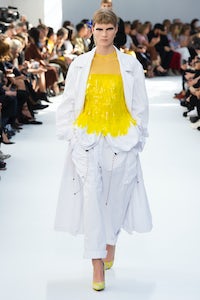 PARIS, France — Dries Van Noten’s invitation was a slab of Perspex printed with a Luke Stephenson portrait of a bird. Dries was quite specific. It was a portrait, not a photograph. In the same mindset, he thought of each of the women on his catwalk as a portrait, with eyes made up to emphasise the fact they were looking at YOU.

I didn’t get that, but I got the birds. Feathers were a recurring motif, real feathers capping heads, sprouting from a beaded top or the lapel of a fabulous double-breasted navy trouser suit, fake plastic feathers cascading down dresses, tops and skirts. Light, flight, airiness, anything you associate with birds (apart from carrion crows) insinuated itself into a collection that felt like a transformative moment for Van Noten.

Or maybe it was simply something that took him back to basics. He insisted that his recent investment from Puig had changed nothing, aside from guaranteeing his company a future. That actually sounds pretty major, and if it was the spur for this collection, then hallelujah! It was Dries at his very best, working the contrasts between high and low, marrying the functional beauty of workwear to the beaded, embroidered glories of something approaching couture.

“I don’t want to make couture,” he demurred. “I like to make clothes.” But there is something alchemical about Van Noten when he addresses the fundamental things. A boiler suit rolled down over an embellished top, or a big coat knotted round the waist created a peplum silhouette, a modern New Look. He was insistent: YOU can do that, you don’t need a designer to show you how.

Not strictly true, when it’s a designer who offers you such counter-intuitive but seductive unpredictability: the delicacy of organza-like nylon and silk coats over boldly striped dresses, the bold hand-painted brushstrokes on a sinuous shirtdress, the yellow netting slung round a photo-printed wrap skirt. And all the time, the blank canvas of white cotton. It was a perfectly tuned combination of reality and fantasy, which is fashion’s raison d’etre right now.