There were some striking outriders, but the inescapable niggle was a lack of design rigour. 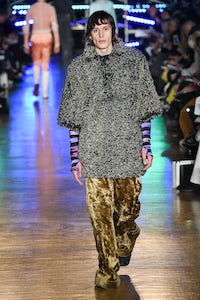 There were some striking outriders, but the inescapable niggle was a lack of design rigour.

LONDON, United Kingdom — The legendary crucible of fashion talent that is Central Saint Martins has often had a presiding alchemist, a looming presence who weaves him- or herself into the fabric of the moment. CSM alumnus John Galliano has filled those shoes more than once, and so it was again for the MA graduate show on Friday night.

Squint sideways at the 25 designers on parade and you could see all sorts of echoes of the ideas Galliano has been evolving in his transformative stint at Maison Margiela. Like “dressing in haste.” Sheryn Akiki, co-winner of the L’Oreal Professionnel Creative Award, showed clothes that, in their crazy-ladylike, rundown-pump hecticness, embodied the idea more successfully than Uta Sienkiewicz and Yuyao Liu with their collaged, ragged, post-apocalypsis. All three had something of Galliano’s notion of “unconscious glamour.” So did Nensi Dojaka, who showed patched-up lingerie looks with a decadent Weimar tinge (very alt-Galliano).

Stefan Djokic’s outfits for men were a blunt evocation of Galliano’s central concept of “décortiqué,” garments reduced to a skeletal memory. There was not much left of Djokic’s autopsied tailoring. Also in the men’s department, Marvin Desroc (the Versace scholar) elaborated on Galliano’s idea of “male couture” with his pagoda-shouldered suit, organza shorts with a paper-bag waist and trousers wrapped in huge decorative bows. Kaushik Velendra topped his precise tailoring with moulded shoulder pieces, mini-couture capes.

Akiki shared her L’Oreal Award with Goom Heo, who showed menswear that winningly matched high performance to a neo-Renaissance flair, with codpieces, and tops and pants trimmed in multi-coloured Palio scarves. There was something of the same flavor in Kitty Garrett's wide-striped britches and quilted silks, and Martin Tual’s fluttering op art swirls, like folded wings or mollusks. Again with the rounded shoulders and capelets, Renaissance pageboys...or maybe futuro-Romeos. Tual was the winner in my book.

It being a graduate fashion show, there were some striking outriders: Sese Olatunde made a sci-fi hybrid of Klaus Nomi and a mariachi band (maybe Nomi was sci-fi mariachi), and Wanda Wollinsky offered prim young men in grey flannel jackets and skorts. The Prime of Master Jean Brodie!

But it wasn’t actually a prime year for CSM. If the takeaway was menswear promise, which reflects the focus in fashion at large, the inescapable niggle was a lack of design rigour. Still, they’re young, they’ll learn. After all, even Galliano was a graduate once upon a time.