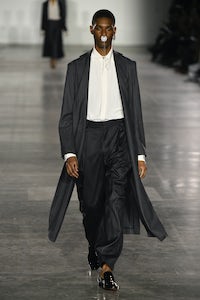 LONDON, United Kingdom —  “Anti-sportswear,” said Edward Crutchley of his new collection. Not fierce, but clearly determined. He claimed he wanted to move away from the oversized volumes of sportswear so, in keeping with his mentor Kim Jones’ debut at Dior, it made perfect sense that the emphasis this time would be on a spirit Crutchley defined as “expensive elegance” — with Stephen Jones hats and all. “It’s what we’re looking for in London,” he insisted.

The deep-pleated pinstripe pant paired with a long unstructured coat, the grey flannels, equally loose, had a languid sophistication, with the literal edge of a zipper that trailed down the crease of a trouser leg. Crutchley showed a variant for men and women. The same gender neutrality was offered in wrapped, sarong-like skirts. The designer’s affinity for Southeast Asia was also obvious in the Sumbanese ikat print he revived from his first collection. (This is his tenth, which is surely a measure of how time flies in fashion, just as it does in every other endeavour we rely on to hold back the years!)

Crutchley’s knack for fabric research has helped him to a place in the finals for 2019’s International Woolmark Prize. Here, Tyvek met panne velvet met cashmere jacquard in an off-kilter mélange that hinted at the kind of subtle iconoclasm that has always marked the best of British. Crutchley has yet to show the breadth that guarantees him a spot in the winner’s circle, but he’s at least halfway there with the craft and the sense of humour. A couple of his models sported big fluffy croc and duck slippers with their formal eleganza. At some point in your highly structured day, it’s all you want, isn’t it?