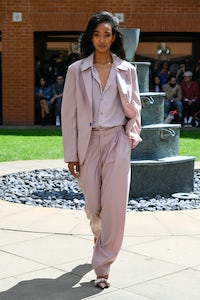 LONDON, United Kingdom — DRESSY! That’s what Edward Crutchley called his new collection. He’s such a sly devil that you just knew he’d chosen a name that was solidly girded with irony. And that impression was compounded by the fact that he’d rooted his inspiration in the early 1980s. Stephen Jones wrapped models’ heads in huge swathes of taffeta that recalled Princess Julia modelling the milliner's very first collection in 1980. “Nostalgia without being nostalgic”, Crutchley called it. “Britain before it was Cool Britannia, before Britpop and the YBA’s.” In other words, Britain when it was in thrall to Margaret Thatcher’s activation of the aspirational bourgeoisie, when the notion of more-is-more dominated pop media. “The antithesis of what you want life to be,” Crutchley sagely noted in a veiled reference to the chaos of a Brexit-riven Britain.

Nevertheless, antithesis or not, the designer celebrated extravaganza in his collection. It’s not the first time. Crutchley’s skill in developing luxury textiles has brought him success as a gun for hire in the fashion industry. Since he launched his own label four years ago, he’s applied his experience to creating a baby brand that has stood out for its richness, its depth, its incredible artisanal hand. And he’s won prestigious awards, like the International Woolmark Prize.

Maybe that’s why Saturday’s offering was initially disappointing. It was singularly one note, the oversize volumes of jackets and capes, the detailing (huge bows at shoulders, on shoes), the slippery, satin-y sheen of the fabrics, the draped, rounded silhouettes all communicating a conventional notion of glamorous excess. DRESSY! But you can’t take a designer like Crutchley at such face value. He knows too much. Should a stick in the mud such as I bewail the absence of the extraordinarily beautiful brainstorms he’s had in the past, he will simply say that he is always looking for beauty, and finding it in this collection, say, in the floral jacquards from Italian mills on the shores of Lake Como, as opposed to the workshops of a kimono master in Kyoto.

That is the reassuring mark of Crutchley’s confidence as a designer. If the mulberry-toned silkiness of this collection seemed superficial and blandly bourgeois, the sheer knowledge that informed it underscored how it is a mere waystation on the designer’s stairway to the stars. Where else this season will we hear about Anna Maria Garthwaite, who, in the early 18th century, was famously responsible for Spitalfields damask and vivid silk florals? It’s much more than an academic exercise for Crutchley to evoke such forerunners. He re-animates them in his own work, in the same way that he has incorporated extraordinary indigenous techniques into his designs. Crutchley has barely scratched the surface. Call this a hiccup.