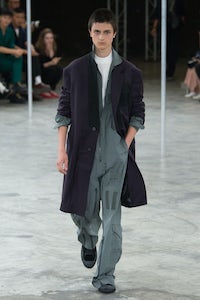 PARIS, France — Embrace the chaos. That’s the stance that Lucas Ossendrijver has taken in the face of a world where “everyone zaps from one thing to another with an attention span of ten seconds.” He feels it’s his mission to find beauty and poetry in ADD. That’s where the embrace comes in.

I could have sworn I saw Mikhail Gorbachev printed on a shirt in the new Lanvin collection, but it was in fact the face of a random stranger, photographed then reproduced by one of the street artists in Montmartre who sketch tourists for a living.

Ossendrijver said his new collection was built on a reconciliation of polar opposites. What’s the opposite of workwear, for instance? Why, tailoring of course. Jackets and coats fully canvassed in the finest sartorial tradition, paired with overalls. Tomas Maier did something similar at Bottega Veneta years ago. It was a great idea then, and its effectiveness had barely faded. The jean jacket body with sleeves of Princes of Wales check was a more casual pass on the same notion.

The designer’s other face-off was between activewear, and what he imagined its opposite, traditional fabrics like pinstripes and Prince of Wales checks, which he had bonded on something called “a fluorescent technical membrane.” He mixed in some knitwear, also bonded on technical membrane.

Lanvin has always been scrupulously attentive to its casting, although the results have often seemed wilful. The house is famous for a bespoke business that dresses more French politicians than any other. The runway could well be populated by their grandchildren. Ossendrijver saw between 400 and 500 boys to make his pick for this show. Praise him for the diversity of the result, but wonder at the barely-out-of-tweenage. Perversely — or smartly — that forced complete focus on the clothes. Maybe that’s why it felt like a strong collection from the designer.