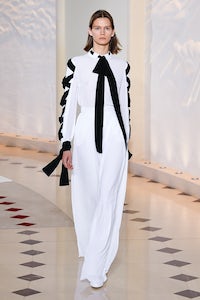 LONDON, United Kingdom — Emilia Wickstead clearly looks to the legends of mid-century couture, and this season Cristóbal Balenciaga was there in spirit, perhaps as a result of big exhibitions in both London and Paris. Wickstead paid home to the Spanish couturier with some out-there silhouettes, such as a pistachio crape dress with ruched raglan sleeves tied into a bow at the back, a chintzy floral gown with a balloon skirt, but most of all with a marigold opera rope with a scooped neck — just like the one owned by Mona von Bismarck.

There were the neatly tailored streamlined looks that Wickstead is known for — sometimes the booming balloon hid away the waist, or it was dropped to the knee. She kept her signature turtleneck and high-waisted trousers, too, but this time they were slightly slouchier and some of the concealed necks were achieved by draping fabric and creating a dramatic revealed back. The risqué elements are a departure for Wickstead, who also showed piped sheer chiffon shirt dresses without anything underneath. But the clothes never veered away from ladylike.

There was one major issue though: Wickstead said her collection was inspired by the Harlem Renaissance and its epicentres, such as The Cotton Club and the Savoy Ballroom, where African-American culture exploded with artists, writers, musicians and poets. She said that was channelled into a sense of self-expression through bright colours and symbols debossed onto fabrics, yet the casting of the show had a dearth of non-white models. It’s a shame because there could’ve been more energy and authenticity on her runway had Wickstead opted for more diversity. Certainly, those bright colours and old-school shapes would have been made much more memorable. Her coterie of loyal customers may have become more varied, too.