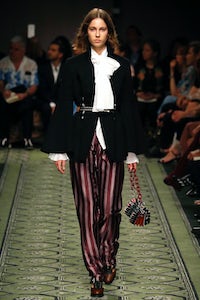 LONDON, United Kingdom — Christopher Bailey’s personal commitment to better living through technology has transformed Burberry, but that doesn’t mean there haven’t been moments when he’s wondered if the speed of change wasn’t running away with more humanist considerations. Time to reflect, for instance. But in launching Burberry’s latest initiative – see now, buy now – Bailey engineered a perfect paradox. Never has a Burberry collection been more immediate, but never has the time and effort expended on its creation been more obvious. And all of it underscored by a specially composed soundtrack performed by a 21-piece orchestra, which took time too.

“Liberated.” That’s how Bailey described his mood. To take Burberry into its future, Bailey went back to his past, especially his passion for the Bloomsbury Group, the tight little clique of writers, artists and thinkers who dominated British culture in the early 20th century. The timeskipping Orlando, a novel by Virginia Woolf, one of its leading lights, provided a framework. It fitted with Bailey’s experience in trying to install Wi-Fi in his house in Yorkshire. The centuries-old stone walls resisted the invasion of modern technology. That got him thinking about all the people who’d lived between those walls in all the time the building had been standing. Layers and layers of time: there they all were on the Burberry catwalk, 83 looks, synthesising centuries.

Leopard leg’o’mutton sleeves on a trench coat? OK. Shakespearean frills at throat and cuff, for both the girls and the boys. More Shakespeare (or at least something historical) in the construction of Popeye-forearmed sweatshirts. Elaborate regimental jackets (overnight results suggest those particular numbers were, tellingly, early beneficiaries of the see-now-buy-now pitch). The floppy, silken languor of Bloomsbury, pyjamas and dressing gowns. Antique tapestry and wallpaper prints, the feminine delicacy of gilded lace, the masculine solidity of houndstooth. Everything on top of each other, to be picked apart and re-layered to create a new character as inclination took. It was so much more interesting than Burberry has been for a long time. And Bailey’s emotional engagement was so much more palpable.

Bailey insisted it made little difference showing his collections for men and women together. Everything was ready in June anyway. But the months since then had allowed a complete integration, time to evolve a richer narrative, to think about how and why things fitted together. It showed. Even more so in the fact that Bailey realised a dream by contextualising the presentation in a temporary Burberry installation called Maker’s House in the building formerly occupied by the legendary Foyle’s Bookshop on Charing Cross Road. He filled the building with artisans from The New Craftsmen - weavers, sculptors, ceramicists, textile makers and many more – in the most heart-warming show’n’tell in living memory.

It wasn’t the Second Coming of technology in fashion. There was still a fair amount of clunk, though that’s inevitable in a show this big. (Look at Chanel!) But what Bailey succeeded in doing was making the embrace of vast and rapid change look not just accessible but intimate, and even charming. And, as he pointed out, the nature of change is that it keeps on changing. He called this his September collection. The next one is called February. Who knows what will have happened by then?