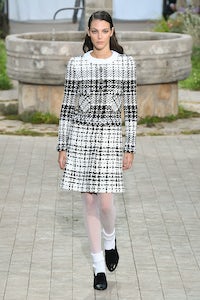 PARIS, France — Gabrielle Chanel is the gift that keeps on giving for the brand that bears her name. Creative director Virginie Viard found another rich seam to mine from the motherlode with the wonderful collection she showed on Tuesday. Chanel was 12 in 1895 when her father left her and her two sisters in the care of the nuns at the abbey in Aubazine after the death of their mother. She endured the rigours of a cloistered life for six years, until she was sent to Notre Dame de Moulins where she was taught to sew. But it was at Aubazine that the raw clay of Gabrielle was shaped into the young woman who would be Coco. In 1925, when Chanel designed her iconic logo of interlocking C’s, she was remembering the stained glass windows of the abbey. Virginie Viard’s own experience of Aubazine infused her new collection with an empathetic spirit that was quite emotional in the moment.

One of the pleasures of a Chanel show is seeing the transformation the production elves have wrought inside the Grand Palais. Tuesday’s was grand in execution but deliberately humble in effect, recreating Aubazine’s cloister garden in all its dishevelled summery charm. There were even tomatoes on vines. In Paris! In January! Opus III’s “It’s a Fine Day” la-la-la-ed on the soundtrack, a sweet, sunny sound to accompany looks that Viard said she’d drawn from the uniforms that girls might have worn long ago in institutions like the Abbey. (Later, Michel Gaubert treated us to the equally wide-eyed-and-innocent “Little Fluffy Clouds”.) The models had schoolgirl parts in their hair, white stockings on their legs, black loafers and white ankle socks on their feet. The initial passage had the blazer-and-skirt directness of a school uniform, albeit in black and white tweeds and a broken houndstooth, which was Viard’s way of artfully acknowledging the impact these early years had on Chanel’s design aesthetic later in life. And, as she added more telling details, the biography grew too. It became easier and easier to see how the child was mother to the woman. The white collars and cuffs of the nuns, the smocks of the boarders at the Abbey, the geometric leading of those stained glass windows, the pale wildflowers and the butterflies of the cloister garden: all of them were translated into subtly beautiful motifs in Viard’s clothes.

Maybe it reads on paper as an infantilisation of the essence of Chanel, but that wasn’t the case at all. I mentioned empathy earlier. As much as Viard conjured up an idealised vision of Gabrielle’s teenage, she also wove her waywardness into the mix. There was a knowingly adult subtext in the collection. Gigi Hadid was a star in the severity of her long black dress with the bad-teacher slit. A solemn black gown with a widow-y black lace capelet was backless. Adut Akech wore what was possibly the season’s most perfect summation of the essential dichotomy of all human existence: good vs. bad. The top was virginal white, with an enveloping collar as pure as the driven snow. The skirt was a sinuous black tube which ended in tiers of party ruffles. This convent girl had gone to town!

After that, Viard showed a wedding dress which was traditional only in its whiteness. It was short, sweet, maybe proper in its flat-pleatedness. But the veil was attached to the bride’s chignon, she could pull it off on a whim, maybe dispatch her affianced with equal alacrity. That felt like Coco in all her enduring modernity, and Viard convincingly pulled off the impressive feat of conveying her fascinating, complex spirit.