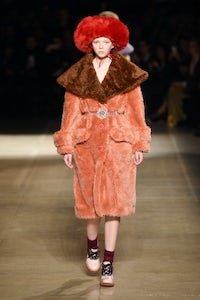 PARIS, France — Miuccia Prada gave full rein to her ambiguous feelings about glamour this season: its “stupidity” in Milan, its “madness” in Paris. Ambiguity should always look this good. In both cities, she mounted shows that fizzed with surreal joie de vivre.

Or maybe “fuzzed” is more appropriate. For her Miu Miu presentation on Tuesday afternoon, the entire venue was coated with sinus-tickling fake fur in a lurid shade of purple (the invitation was furry too). And the collection used the faux to maximum effect (except when it was fox): big coats, big collars and big caps, a full-on challenge to restraint in a palette that started with Singapore sling and ended on pink gin fizz.

Insert your own cocktail of choice. The point is, Miu Miu was in a party mood, with De La Soul underscoring the uplift. Prada dressed 21st century flappers in paillette-ed and feathery slips then wrapped them in lush, cocooning coats.

The same coats swathed silken loungewear last seen in Jean Harlow’s boudoir. The broad-shouldered, nipped-waist silhouettes echoed the 40s (in 80s activewear), the telephone and kittykat prints had a kitschy early 60s flavor. In other words, the collection was all times, and no time — or at least, no time that wasn’t a glamorous good time. And the footwear was nothing short of fabulous.

This season has offered a couple of clear choices: engage or escape. Miuccia Prada may have covered both bases. As exuberant as she was about “the madness of glamour,” she was even more enthusiastic about the casting for the MiuMiu show, as diverse as any we saw during these past few weeks when a vital new vigilance has arisen around the challenges facing women and girls inside and outside the industry. If it energised her show, it also energised her. And there’s a lesson for fashion’s old guard.