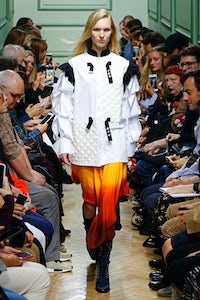 LONDON, United Kingdom — What a difference a summer spent in the South of France makes. The collection Jonathan Anderson showed on Saturday was his most relaxed ever. Dip-dyed, handkerchief-hemmed dresses in raw linen and cotton, coloured in shades of sky blue or sunset orange, were the essence of holiday. You pictured beautiful gypsy travellers dancing round a bonfire on a beach. Another dress, collaged from crisp linen placemats, compounded the effect. Again, the look summoned up a vision: J.W. scooping up an armful of linen from his local boîte and heading home to run something up. (Well, Picasso used to draw all over his placemats, so creative vandalism has a rich heritage.)

Anderson’s best work at Loewe, his other job, has always been the stuff that’s closest to the artisanal quality of the handcrafted, the heart of peasant Spain. He calls himself a curator as well a designer. There’s little he loves as much as a hand-turned ceramic. That same quality was strong here. It gave the clothes an easy, commercial charm, which was definitely something new to say about a Jonathan Anderson collection.
"But wait a minute… it wasn’t all that. After MDMA lollipops on a beach in Ibiza, the designer dropped a Henry VIII bombshell. The slash-sleeved doublet, the top that finished up with a rolled hem at cuff and waist were straight out of a Renaissance painting. Anderson sutured a quilted Henry top to a bubble skirt. Peculiar plus, but, in context, an idiosyncratic statement about structure in the midst of if-it-feels-good-do-it fluidity. And a consummate expression of the designer’s millennial ability to skim wilfully through time and space. His past experiments in era-hopping have sometimes erred towards the academic. Not here.
Same with the jewellery. One earring was inspired by an ancient Egyptian swallow, Anderson said. How ancient? “BC whatever,” he answered. The time/space continuum curls itself into a ball for fashion.