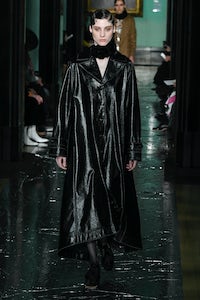 LONDON, United Kingdom — The photographer Cecil Beaton was arguably one of the greatest cultural anthropologists of the 20th century, artfully capturing a lost world of European aristocrats, society swans and Parisian couturiers. But before he became as legendary as his subjects, he was just a middle-class boy from Hampstead dressing up his sisters for impromptu sittings with makeshift backdrops made of aluminium foil and cellophane. You can see why Erdem Moralioglu has an affinity for him. The designer can’t resist the grand dames of yesteryear, or the present-day for that matter, and dressed his own sister up as an aspiring designer in suburban Montreal. It’s the kindred spirit of two boys with big ambitions.

So with an upcoming exhibition at London’s National Portrait Gallery (Moralioglu’s favoured show venue) devoted to Beaton and his entourage of Bright Young Things, it was fitting that the designer’s latest collection was devoted to his hero. He worked with the show’s curator, Robin Muir, on research and studied Beaton’s pictures and floral illustrations from the ‘20s and early ‘30s. Many of the looks were ersatz tributes to the clothes Beaton and his pals wore — like his leopard-skin dressing gown (now a monochrome mohair coat), Stephen Tennant’s black vinyl mackintosh (now a patent trapeze-shaped swing coat) and Nancy Cunard’s cubist wrap coat (now more or less an identical version) — but it still looked as desirable in 2020 as they did a century ago.

These days, Erdem is the go-to for a certain kind of old-school elegance that appeals just as much to mothers-of-the-bride as it does to well-heeled young women who like their florals for spring. Yet the success of this show was in its sense of experimentation, like a cardigan shrugged over the shoulder of a rose-print tea dress or a boxy pearl-strewn cashmere blazer worn over a silver lace gown. Little sequin-strewn beanies, ribbon-fastened pelerine collars and chunky flatforms unexpectedly completed the look.

In loosening his grip on primness and poise, the designer conjured a genuine English eccentricity — something that so many often try to achieve, but can’t quite manage. Perhaps that’s because he worked with one of today’s Bright Young Things, the British stylist Ib Kamara, who is deft at turning trash into treasure and creating spellbinding imagery on a shoestring budget. Parallels between the ‘20s then and ‘20s now were bound to surface, but if there was a deeper subtext to the show it was that venturing beyond one’s comfort zone can sometimes deliver great results for a designer.