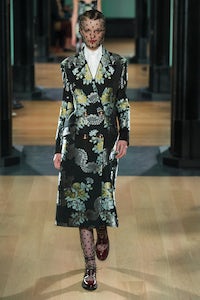 LONDON, United Kingdom — One of British fashion’s greatest assets is that it’s blessed with dazzling storytellers. Vets and tyros alike weave enchanting webs around their collections. Often, the tales they tell elevate the work. So it was with Erdem Moralioglu on Monday morning. “The Heir and Astaire," a film by artist T.J.Wilcox, had familiarized him with the story of Adele Astaire, who partnered her brother Fred to stage stardom in the 1920s before marrying Lord Charles Cavendish in 1932 and retreating to Lismore Castle in County Waterford, Ireland in what was, for the time, a racy prince-and-showgirl pairing. The drink did for Charles, and Adele remarried, but forever more, she’d summer at Lismore.

Backed by his moodboard of Astaire portraits, Erdem praised Adele’s independence, her glamour, the “romantic bravery” of leaving the bright lights behind for love, to live a country life. She was clearly an incorrigible optimist. She did, after all, install an outdoor pool at Lismore. All of which made her a fabulous addition to Erdem’s gallery of inspirations. He merely had to dress this vision and he was practically guaranteed a star collection.

The imaginative crux of it was the integration of his and hers: Louise Baillieu, hair immaculately marcelled by Anthony Turner, in a white shirt and Arran sweater with huge ostrich feather sleeves, layered over a silvery beaded flapper skirt. And more: a cabled cardigan belted over a flaring tea dress; a brown corduroy ensemble, suitable for country walks, under a substantial plaid cape; tweeds spangled with sequins…Adele’s world sprinkling stardust on Charles’s, and bringing new substance to Erdem's.

The show was staged in the National Portrait Gallery. Somewhere else in the building there would be shimmering Beaton portraits of Adele and Charles’s world. Erdem showed an evening dress veiled in a huge polka-dotted tulle confection that trailed away on the floor, imagining Adele negotiating her way through the corridors of Lismore in something similar just as his model had to maneuver through the aisles of guests. The last look was a starburst of silver embroidery on a black satin cape, with matching skirt. It was anchored by distinctly masculine shoes and socks. A pragmatic but beautiful grace note on which to end the story.