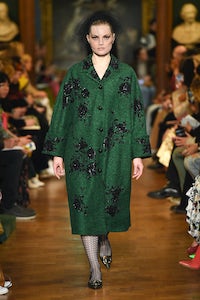 LONDON, United Kingdom — Erdem can certainly find ‘em. On a break in Rome, he visited the Palazzo Doria Pamphilj and its art collection — one of the world’s biggest in private hands — and found himself falling under the spell of Princess Orietta Doria Pamphilj, the woman who had carried the extraordinary weight of this inheritance on her shoulders at the same time as she was dipping her toe in Swinging London and adopting her son Jonathan in the UK.

The princess died in 2000, but Jonathan, who has become an ardent historian of his adopted family, was available to Erdem. That access fed the designer’s sense of time and place. For Princess Orietta, the Rome of Pasolini and Fellini and Capucci met the London that was just finding its mojo. “Nipped,” Erdem called it. And that was where the show opened, after Guinevere Van Seenus had made her veiled and stately aristo parade in a forest green wool coat studded with jet beading.

But Erdem seemed ultimately less interested in the princess’s London experience than he was in the lavish intricacies of her life in Rome. He created a wardrobe in dark jewel tones, with dresses and skirts that either bubbled, trapeze-ed or flared with couture-ish brio. He bowed some dresses, wreathed others in rich-lady cardigans, buttoned discreetly at the throat. There was a pope — Innocent X — in the family’s past. Erdem borrowed his papal purples and reds.

There was something eerie and slightly airless about the collection, almost like Erdem was staging a séance: Anthony Turner’s principessa updos and Val Garland’s heavy eyeliner compounded the studied impression of an incredibly wealthy woman, somewhat unhinged by loneliness, roaming her 1000-roomed palazzo at night, dressed to the absolute nines and tens. After the show, someone asked Erdem about the relevance of his collection. Remember Julie Christie at the very end of “Darling”? You get everything you want — the big house on the hill, the palazzo in Rome — and it’s still nothing. There’s your answer. But Erdem had his own answer. There’s no escaping the past. As sure as you fix your eyes on the future, there’ll be a dark shadow a hundred yards down the hall.