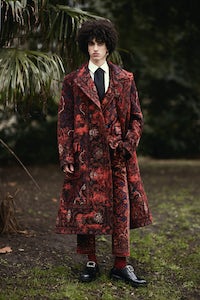 MILAN, Italy — After the powerful, primal Celtic reverie of Sarah Burton's Spring collection for women, I nursed hopes that she might draw from the same well for her new menswear. But the McQueen woman and the McQueen man are seldom on the same page. If Burton's woman is a magical creature of the elements, her man is formed from all too human clay, done down by decadent earthly appetites. It's the sort of overwrought story that would work well as a cinematic period piece (I think Luchino Visconti may already have made a few versions). And the costume designer wouldn't have to look further than McQueen's menswear to dress the scenario.

Its innate costumeyness became something of an issue with this collection. A huge cape embroidered in bullion with peacocks makes a gorgeous museum piece. Likewise, all the other extraordinary arcana: the magic coat cut from a worn carpet, the weighty black shearling that instantly turns its wearer into a terrifying yeti, the massive white poet’s shirt, the brown velvet embroidered with peacock feathers studded with diamante, the voluminous coat in flaring regimental red… each and every piece exhibition-worthy. But is it wrong to expect something a little… less?

The muse of the collection was Oscar Wilde living out his last days in Paris in a hotel, with peacocks painted on the ceiling of his room. Maybe he'd have recognised items like the smoking jacket with lavish frogging, or the jackets with their Edwardian elongation. Or perhaps the collection's evocation of a hermetic, claustrophobic world might have made Wilde think of one of his own inspirations, the novelist Joris-Karl Huysmans, whose most famous character Des Esseintes created his own private Eden, a temple to the senses that was his escape from the harsher realities of life.  Maybe it was that impulse that Sarah Burton was tapping into.  But it would be illuminating to see how her work with menswear would benefit from engagement, rather than escape. McQueen himself was, after all, about confronting reality.