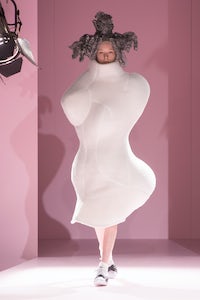 PARIS, France — “The future of silhouette” was Rei Kawakubo’s description of her new collection, but it could equally have been silhouette’s past that inspired her. Her designs exploded the female form into primal shapes that looked as much Stone Age as they did Space Age. Either way, they sidestepped any fashion consideration as efficiently as her defiantly non-fashion choice of materials. Nothing woven. That much we were told. We might have been looking at crumpled brown paper, a fake reptile texture composed of chemical by-products, the felt blankets that moving companies use, cotton wadding from a medical facility, silver foil…

And it was beautiful. Beautiful like the Venus of Willendorf. Beautiful like Warhol’s Silver Clouds. There were recognisable human forms in the exaggerated shapes. I’d swear I could see a figure with its hands thrust deep in pockets, for instance. One shape was belted. Another looked like a biker jacket melted in primordial heat.

It often seems like a Comme des Garçons show simply happens, beginning and ending quite randomly. With the upcoming show at the Met, a different level of scrutiny will be applied to everything the label does. One thing that was striking about Saturday’s presentation was its performance aspect: the placing and use of the suspended spotlights; the movement of the models, warily circling each other; Frederic Sanchez’s soundtrack, of course, which used the chill, drifting electronica of Biosphere, the Norwegian musician who once recorded the noise made by the Northern Lights.

There was a quiet deliberation to all of this which heightened an eldritch sense of drama, of something pre — or more likely post —human. These weren’t so much clothes as they were evolving thought processes. And they highlighted how essential such evolution is.