The big takeaway this season was the contrast between the collection’s languid and sculptural shapes, but it sometimes felt like more of the same from the resort-ready designer. 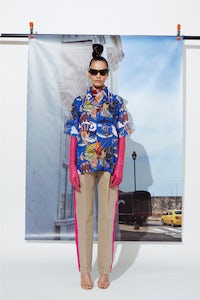 The big takeaway this season was the contrast between the collection’s languid and sculptural shapes, but it sometimes felt like more of the same from the resort-ready designer.

PARIS, France — In a time where designers are using their collections to try and seriously engage with the zeitgeist, grappling with ideas ranging from political upheaval, diversity, and gender inequality (with varying degrees of success), Colombian-born designer Esteban Cortazar’s signature look — flirty, light, and sexy — feels disconnected from the world around it.

That’s not a bad thing.

Shown at his studio, a stone’s throw from the Louvre in Paris’ first arrondissement, the collection was built around the idea of three female “types.” There was an imagined “Caribbean Holly Golightly” in updo and sunglasses to embody the brand’s go-to seaside glamor look; for more restrained designs, Cortazar had an unnamed, “elegant muse” in his mind; and lastly, Cortazar’s friend, the demonstrative model and designer Michelle Elie, inspired the wilder statement pieces which, the designer said, “express creativity, ideas of proportion and of silhouettes.” (She also is one of the stars of the lookbook.)

For the Holly Golightly type, there were wrapped dresses and tapered, pleated trousers with a side stripe, or a knit top and midi-skirt in pea green and a handsome robe coat in navy and brown menswear stripes. The more subdued muse looked best in a chunky, high-neck sweater over wide-leg jeans, a sleeveless high-neck dress with a train worn over pants, all in bright pink, a cropped jacket and flared pants in crisp white, and a sensual cut-out dress made of glittering crystal mesh. Elie, an effusive presence, wore oversize cropped jackets with a draped, flapping skirt, shirt dresses printed with festive graphics, and a bold graphic leather coat with a blue skirt.

The big takeaway this season was the contrast of languid and sculptural shapes. They were nice but also sometimes felt like more of the same from the designer. Regardless of season, Cortazar seems to be designing with the beach or a tropical resort in mind. If that means he can sometimes spin his wheels with the body-skimming frocks and the bold, vacation-ready prints and saturated colours, at least he knows who he is and has developed a signature design language. Still, one can’t help but wonder what he would do if he pushed himself outside his comfort zone and imagined his customer at Aspen or Gstaad. No doubt it would be a fun experiment for him and us.

Most interestingly Cortazar introduced a contemporary-priced sub-collection (ranging from $40 for shirts to $200 for dresses), made with Seven Seven, a high-street brand from Colombia (though he’ll take the line over entirely going forward). Cabana shirts printed with a surreal mix of religious and street iconography were an homage to the painted signs and graffiti done by Popular de Lujo in his hometown, while other shirts featured light-hearted and stylish illustrations by his father, an artist, or photos of cliffs and sunsets.

For the lookbook, both collections were styled together — “That’s how people dress today,” Cortazar said with a shrug. Upon closer look, Cortazar’s work isn’t completely devoid of deeper implications. As a Colombian working in France, there’s a sense of outsider-ness in his designs, especially the marriage of Latin flair (ruffles, bold prints) and Parisian savoir-faire. Plus, the incorporation of South American imagery and his use of mostly black models feels both like deeply a personal choice and like subtle nods toward the political realities just beyond view. But nothing too dark ever clouds Cortazar’s horizons — through his eyes, the weather is always sunny and the skies always blue. If fashion can serve as a salve for hard times, one would be hard-pressed to think of a better one than that.