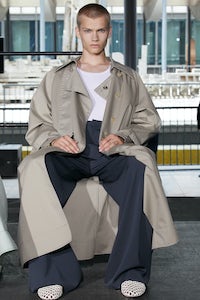 PARIS, France — Jonny Johansson was feeling romantic and slightly bucolic this season. "In Sweden we go on vacation very early, in July," the Acne Studios creative director said as an explanation to the extremely relaxed, almost ethereal but deeply masculine mood of the collection. "I started thinking about the empty city, of how you pack to move to the countryside, but still with the mind of the city boy."

The thought process translated into a series of wonderfully deconstructed staples, from the trenchcoat to the blazer to the dress pant, done in liquid and sometimes sheer fabrications, in a range of pale and organic hues. The sloughy, baggy, extra long trousers were the statement of the season. The look was just a tiny bit hobo, or student on the verge of the summer break (the presentation was held in a University courtyard).

Acne Studios has been at the forefront of the current oversize craze. This season, however, the dramatic volumes, due in large part to the softness of the lines, looked like something with real life beyond the show. It was also interesting to see Johansson taking a healthy distance from the heavily-branded, boldly-logoed sportswear that has taken over Paris. Disco escapism is another hot topic. Acne Studios' own brand of escapism felt organic and real, not glittery. Well done.