Transposing his fearlessness onto the biggest fashion stage in the world, Jun Takahashi consolidated his position as the industry’s best storyteller. 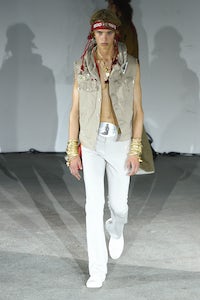 Transposing his fearlessness onto the biggest fashion stage in the world, Jun Takahashi consolidated his position as the industry’s best storyteller.

PARIS, France — This week has been owned by Virgil Abloh’s first collection for Louis Vuitton and Kim Jones’s debut at Dior, but for Undercover devotees, Jun Takahashi’s decision to show his menswear in Paris stirred equally feverish anticipation. He’s presented here for years, but he’s never lavished the same degree of spectacle that he applied to his womenswear on his men’s collections. Until Wednesday night.

In Autumn/Winter 2017, Takahashi showed a women’s collection called “Utopie," its subtitle referring to ten tribes of “a new race living in Utopia." The head-spinning, eye-ravishing complexity of the presentation was a benchmark for contemporary fashion shows.

For his men’s show, Takahashi offered a similarly extravagant concept, this time revolving around a more dystopian scenario, “The New Warriors," eight urban tribes defined by distinctive and confrontational styles, goth vs. geek, folk vs. tech, zen vs. hiphop, an abstract overview of tribal allegiances in the digital age.

It was almost too much, a point rammed home by a post-show visit backstage where the racks upon racks of extraordinary hybrid clothing clarified the extremes to which Takahashi had gone to detail the lives of these imaginary gangs he’d created: the outfits they’d wear, the music they’d listen to. The Vlads (the goths) marched to “Bela Lugosi’s Dead," the enduring Bauhaus classic that, coincidentally, showed up later that same night on Raf Simons’s soundtrack. The Bloody Geekers (the geeks) advanced to the tune of Superorganism’s “Something for your M.I.N.D.” The futuristic Larms — communicating by telepathy, carrying iron pipes for protection – moved around the underground show space to a discordant, electronic version of Erik Satie’s “Trois Gymnopedies."

The minutiae of the scenario was mindblowing, to say the very least. Practically impossible to extract a particular element from the passing parade. Better to sit and let it swallow you whole. Takahashi’s personal favourites were Bootleg Truth in their biker jackets and kilts. Sitars accompanied their march, but they were perhaps the punkiest, which made me think that the one thing missing from the spectacle was an actual iteration of the punk sensibility that has been Takahashi’s guiding light since he first grabbed a mic in the late '80s to perform as Jonio, the rooster-haired frontman of the Tokyo Sex Pistols.

“All of it is punk,” he said. For him, the punk ethos will always be about fearlessly expanding imagination, exploding possibility. Transposing his fearlessness onto the biggest fashion stage in the world, Takahashi consolidated his position as the industry’s best storyteller.