For his debut, Kim Jones inserted himself into the house's history with such confidence that it felt like this was the moment he’d been waiting for his whole life. 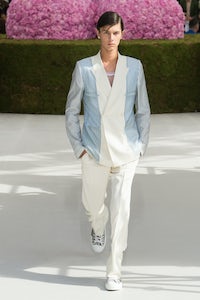 For his debut, Kim Jones inserted himself into the house's history with such confidence that it felt like this was the moment he’d been waiting for his whole life.

PARIS, France — Kim Jones is hungry and restless. His appetite runs the gamut, from the finest manmade luxury to the infinite glories of nature, and he’ll go anywhere to satisfy it. Working for Louis Vuitton, a brand whose raison d’etre was travel, Jones curated a world from his own experiences. His new role as Artistic Director of Dior Men (no longer Dior Homme, the change a literal reflection of a new direction) has been a passport to a different reality, one which is circumscribed by the legend of the house’s founding father, the magic Christian himself. On the evidence of his debut show for Dior on Saturday afternoon, Jones has taken to this new situation like a prodigal son returning to the fold.

Faced by the challenge of reconceptualising the brand’s menswear, Jones went lateral, diving into Dior’s couture archives. Original Dior, but also the extraordinary Galliano years. In Jones’s imperially scaled show, the gorgeous detail was fleeting, or lost. A studio preview allowed for a more appreciative inspection of effects like the floral beading on a shirt-jacket, the Lemarie feather embroideries which were overlaid with vinyl, or the embroidered tulle shirt, covered by an organza coat in the show. The technique was exquisite, a whole new world for the naturally adventurous Jones to explore.

Like any sensible explorer, he made himself a map, based on Dior’s history. From 1947 came the toile de jouy Pierre Frey created for the upholstery in Christian Dior’s first boutique. Jones went back to Pierre Frey for a whole new take on the pattern: as a jacquard for matching tops and trousers, as a tone on tone embroidery. The floral motifs were taken from the patterns on Mr Dior’s own porcelain. So was the palette of pale blues, whites and pinks. An iteration of the logo, last seen in Galliano’s “rasta” collection for Dior in 2004, reappeared as a new lace tank. And the bestselling saddle bag that Galliano originally introduced in 1999 re-emerged from the past, writ small as a pocket on the sleeve of a leather jacket, as a detail on a backpack or on the bill of the caps Stephen Jones designed.

But Jones did a lot more than honour a legacy. He also inserted himself into the house history with such confidence that it felt like this was the moment he’d been waiting for his whole life. Jones is half-Danish. His first model was Prince Nikolai of Denmark. OK, maybe that connection is a stretch. The next one’s better. He brought in his friend Yoon, the Korean-American designer whose own label Ambush is a cult fave, to give some substance (plus a subtle level of bling) to the jewellery. Matt Williams of Alyx, another long time friend, created the interlocking CD belt buckles (which might seem like a small detail until you started focusing on them during the show). And American artist Kaws made the giant floral centerpiece for the show, a 10m avatar of Mr Dior holding his dog Bobby. Kaws also revisited the Dior bee, turning the Napoleonic original into a IG-ready emoji.

In other news, the tailleur oblique, the diagonally-crossing, double-breasted, single-buttoned jacket that was the collection’s signal piece of tailoring, might have been exhumed from the archive but it felt like a quintessential mix of Jones’s own past and Dior’s future. Likewise, the stripes which amplified the collection’s airy, sporty flair. They were courtesy of René Gruau, he of the iconic Dior fashion illustrations. Once, he was all lined up as menswear director, but the contract hadn’t been signed when Mr Dior died. It took Kim Jones to actualise, sixty years later, the ideas that Gruau had for men’s fashion at Dior. On some level, that suggests a profound affinity which should make Dior CEO Pietro Beccari very happy about his choice of designer.

Or, keeping it basic, it’s the start of a beautiful thing.