NEW YORK, United States — What makes a “fashion” brand in 2019? On a marathon day of shows, several of America’s most visible labels took to the runway to express their views.

In their show notes, Proenza Schouler’s Jack McCollough and Lazaro Hernandez put “fashion” in quotes, too. The designers have spent the past six months recalibrating after buying their business back from private equity firm Castanea Partners with the support of a new group of investors. Since they sold a minority stake to what was then known as Valentino Fashion Group in 2008 — just six years after they started the brand — Proenza Schouler has been bought and sold multiple times. And, while the turbulence was mostly hidden behind the scenes, it affected their work.

Money problems can turn into creative problems. One season they were fabricating one-of-a-kind pieces in Paris ateliers, the next they were focused on “humble” (read: affordable) fabrics like denim — not always with the greatest results. Still, Proenza Schouler remains the US fashion establishment’s favourite child, probably because it was industry insiders who built the brand up in the first place. They want to prove their bet was right.

Backstage McCollough and Hernandez seemed to think their new financial structure was working. “We feel like we have our freedom back,” Hernandez said. “We locked ourselves up in the studio all of August working. We’re enjoying making clothes again.”

Tonight’s collection, their take on the power-woman, was inspired in part by those in their office having children. A strong shoulder, a wide-open neckline, a handkerchief dress. Many of the ideas were riffs on things we’ve been seeing on the European runways for a while from the likes of Lemaire and Bottega Veneta, all the way back to Phoebe Philo’s Céline. What made it Proenza was the clean-cut contrasts: the blackest black against the whitest white. The way they make it feel slick and sharp and graphic.

But is that enough? The finale song was Lesley Gore’s “You Don’t Own Me,” which felt like sticking up the middle finger at those who have put pressure on them in the past. The next few collections will be McCollough and Hernandez’s opportunity to prove that all they needed was the space to create. 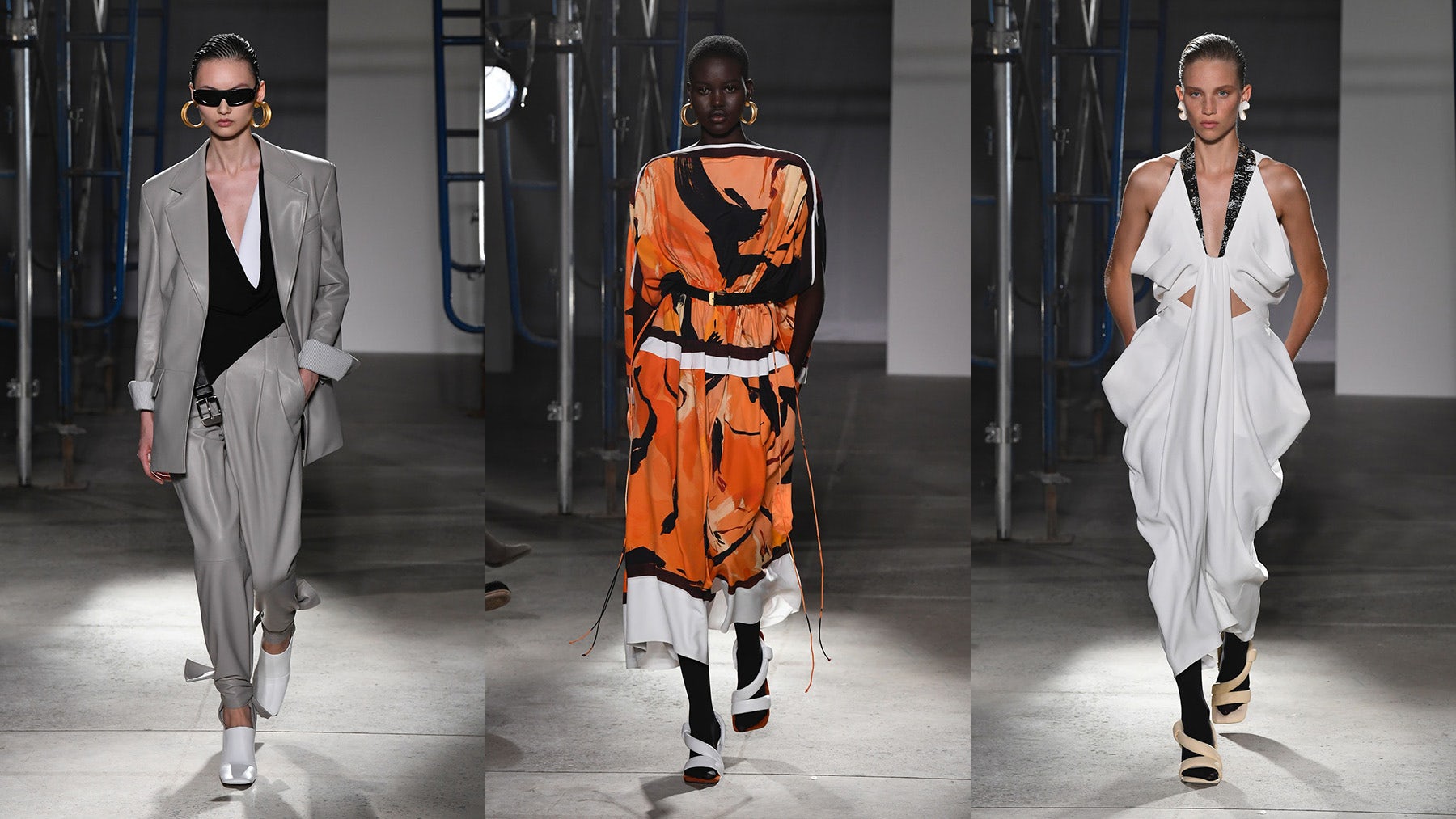 Gabriela Hearst, who earlier this year raised a small but significant minority investment from LVMH Luxury Ventures, is intent on using her privilege to bring awareness to environmental issues. This season, she staged what she claimed was the first-ever carbon neutral runway show, partnering with the climate-action group EcoAct, which helped her production firm to minimise the carbon footprint of the event, from the catering to the transportation. The problem with going on about this, of course, is that it sets you up to be scrutinised. Some were quick to question the thick-as-a-slab-of-wood invites to the show in a season when many designers have done away with physical invitations all together. (She explained that they were made of recycled paper.)

Hearst, however, is as proud of these details as she is of the craftsmanship of her line.

“The key word this season is patience,” she said of the hours of production it took to make some of her more technically challenging pieces. Several were composed of a kaleidoscopic fringe made from scraps of fabric from five years of collections, a technique that recalled memory quilts. The colours were more saturated than usual, inspired by the uniforms of Kurdish female armed forces. (Her inspiration board was covered with courageous women, from Josephine Baker — who, along with being a famous entertainer, was a French Resistance agent during World War 2 — to Athena, the Greek goddess of wisdom, war and crafts.)

The details made for a potent mix. You really have to pay close attention to these clothes in order to fully appreciate them. There was ease in the way they were worn: a crinkled-silk shirt, for instance, was half-tucked into a pair of matching trousers. But as Hearst grows her repertoire, it would be nice to see her let loose a bit. What would spring from her mind if she relinquished just a little control? 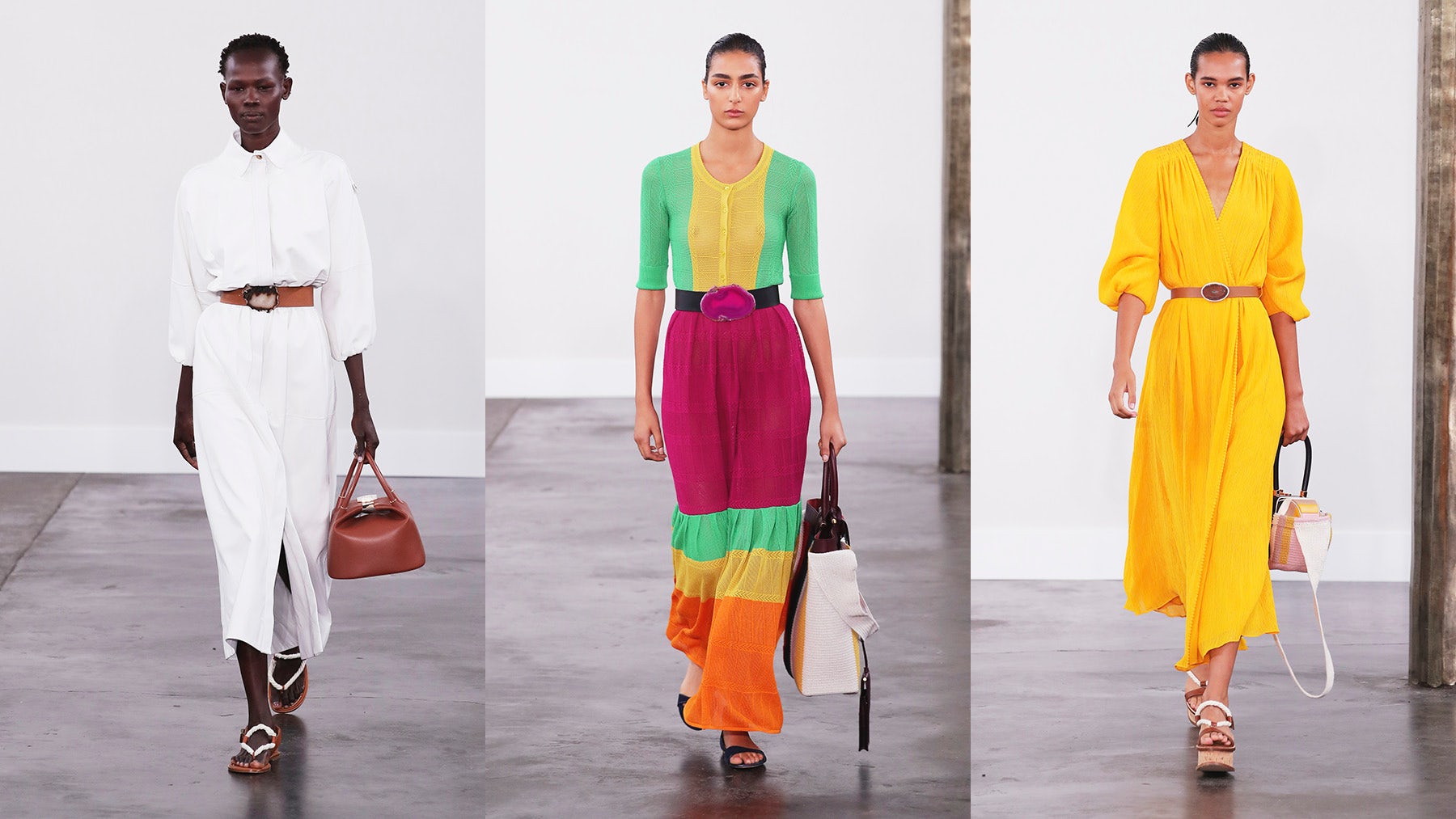 In Brooklyn, Mike Eckhaus and Zoe Latta were reckoning with what it’s like to cross over into commerciality. Last season was a turning point for them. This season, they seemed a little zapped. There were some good ideas in there: the lacy baby doll dress, the knitted bell bottoms, the way different types of knits glided over different body types.

The casting remains incredibly engaging. Season after season, they don’t choose their models for diversity’s sake; they choose them because they are interesting. There’s a subtlety to the mix; it’s not about shock or scoring points. 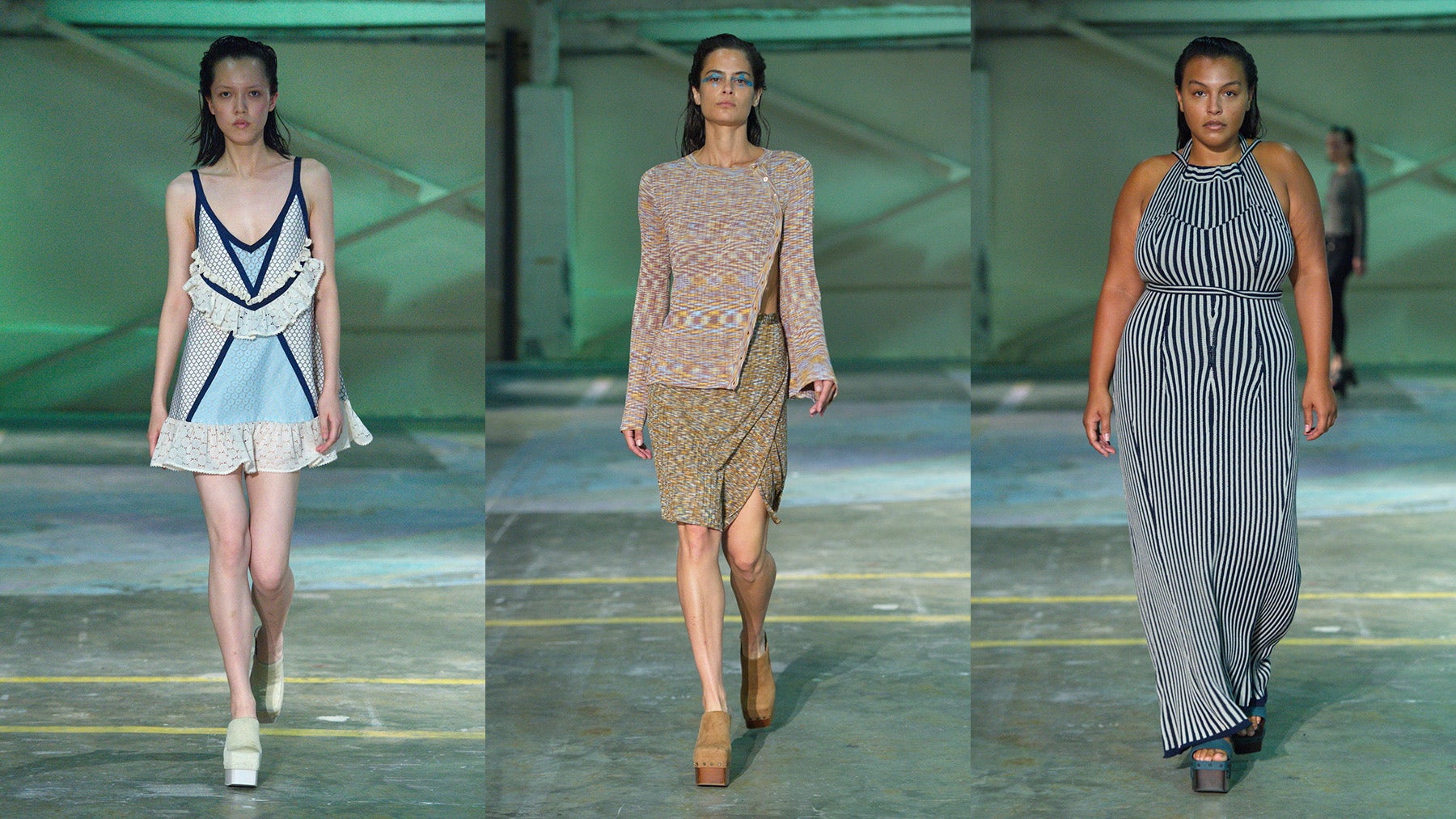 There was nothing subtle about Oscar de la Renta. Co-Creative Director Fernando Garcia, who is from the Dominican Republic — just like the late designer whose name is on the label — believes the brand’s Latin heritage is an under-tapped source of inspiration. This season’s collection was an ode to the Caribbean, which translated into something a tad more risqué — and with a few more ruffles — than what his predecessor may have preferred.

This slight subversion of the label is what's making Oscar de la Renta work under Garcia and Laura Kim, his co-designer. They are not afraid of a hitched-up mullet hemline or a nearly transparent silk chiffon scarf, wrapped around the body to form a mini dress. And more and more, the show’s audience is filled with neo-socialites who don’t mind baring some skin. Today, I saw one such woman place a hand on her heart, using the other to take an iPhone photo of a coveted, leg-baring look. The designers still need to work on their storytelling, however. Sixty looks is a lot, especially when the narrative unravels. By the end of the show, the line-up felt hodgepodge and at times a tad sloppy. 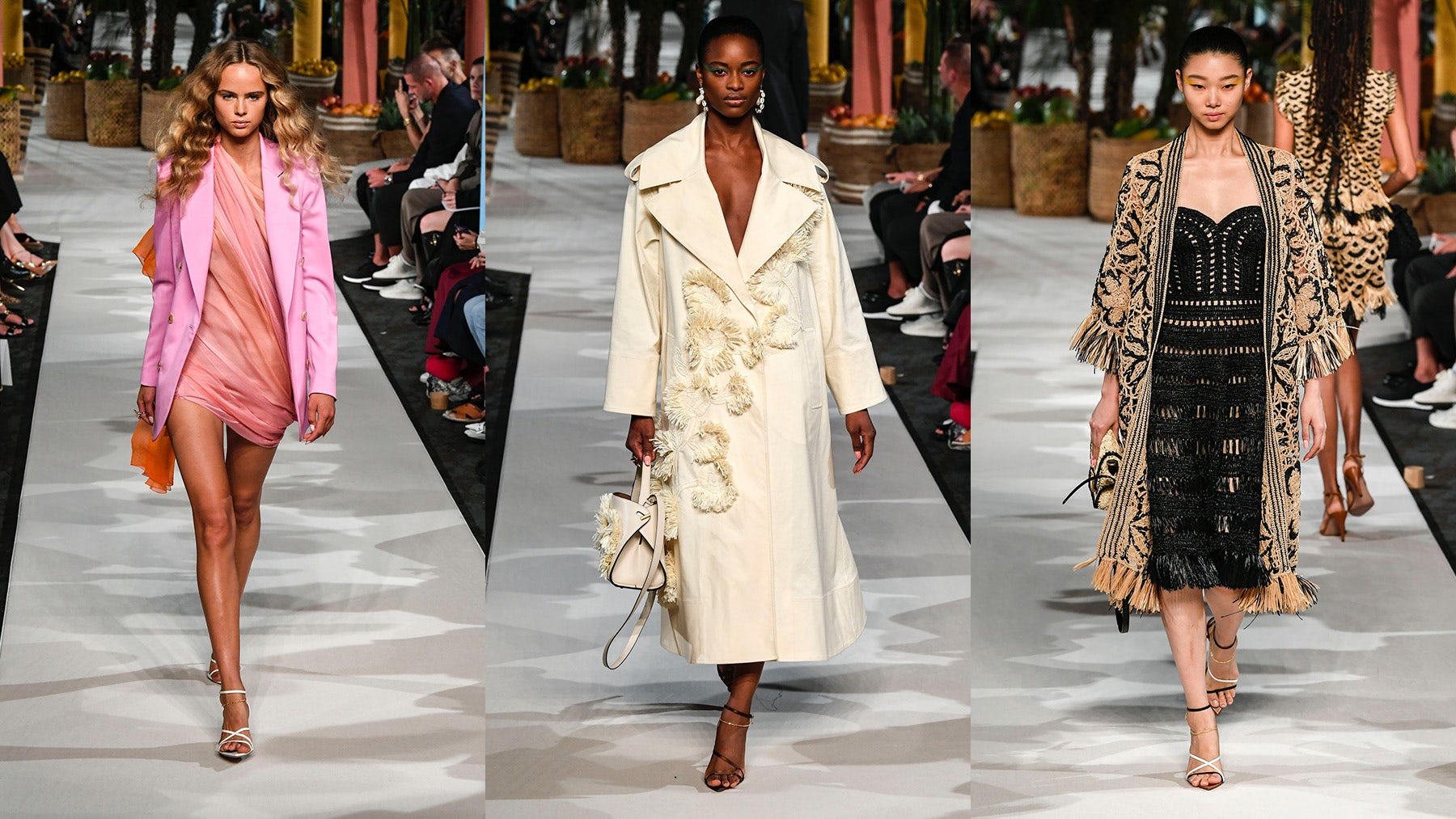 Coach’s Stuart Vevers is all about storytelling, but his stories often lack substance. This season, he got a bit more personal, and that was for the better. He was thinking of 1980s New Wave kids in New York City (the Human League played on the soundtrack). Vevers staged the show — which marked six years for him at the American leather goods label — on the still-new High Line extension, with artist Simone Leigh’s epic Brick House installation as a backdrop. The early-evening breeze was nice and the looks were as cute, as if they had been thrifted in the East Village: handkerchief dresses, leather a-line skirts, yoked blouses and pointy pumps in optimistic colours. (He said before the show that he had been imagining what Coach ready-to-wear would have looked like back then if it had existed.) 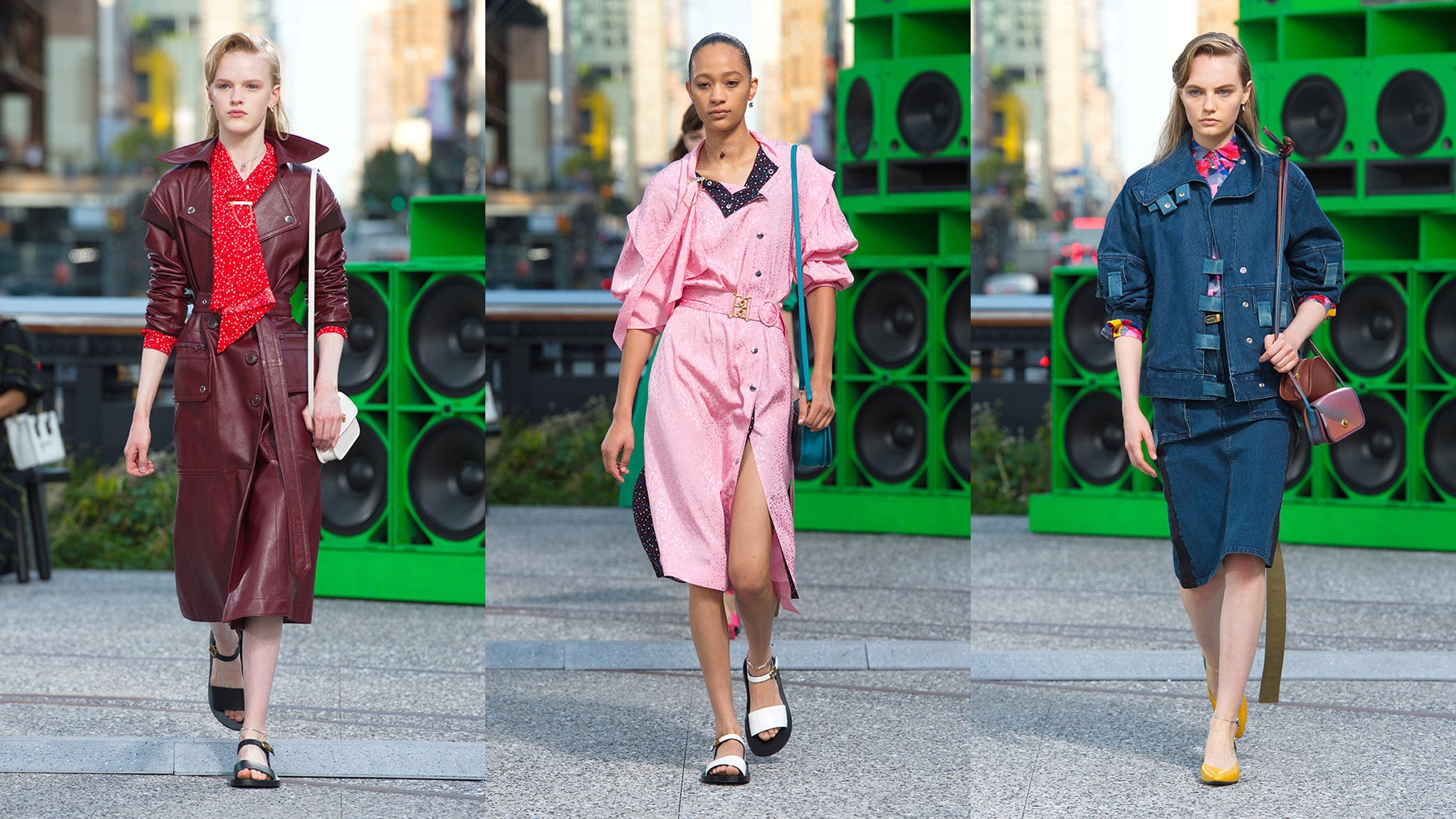 It was telling that the bags were all archival shapes, something the company is once again pushing hard at retail. That’s really what Coach is about: those archives. Vevers’ approach over the past six years has been to create a new story each season. Sometimes they’ve been compelling, sometimes not. But good or bad, the end result is the same. Coach is still searching for its identity.