McCartney excels at feel-good moments, but it also felt like there was more creativity in the design process of this supremely confident collection. 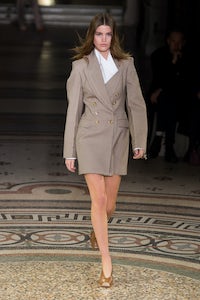 McCartney excels at feel-good moments, but it also felt like there was more creativity in the design process of this supremely confident collection.

PARIS, France — Stella McCartney excels at feel-good moments. She pulled off another one with her finale on Monday morning, when her models thronged her circular show space in the Opera Garnier, like an all-singing, all-dancing flash mob, to the tune of George Michael. “Faith!” and “Love!” they chanted. All we need.

The spectacle capped a supremely confident collection from McCartney, one which built on her reputation for tailoring and her success with activewear. What they have in common is an awareness of the body, and that was in full effect on Monday, from the shapely suitings that opened the show to fitted knit pants and tops with a stitched-in bra, which put a finer point on the silhouette.

A breakthrough in skin-free skin gave McCartney the chance to add leather and suede textures to her design vocabulary. And that, in turn, allowed her to create a different kind of dialogue in her collection: here, a sinister black alter-leather trench, there, one look later, virginal sheer white organza, pleated Miyake-style. And, one look after that, an army green trackie.

The switch-hitting was a typical McCartney gambit: looks for the many women you are. But it felt like there was more creativity in the design process this time round. Take the dressiest looks (I hesitate to say evening, or even cocktail, because that sounds much too stuffy for Stella) which were as simple but effective as lacy tulle smocks veiling skirts and pants. They were the sort of airy confections you could imagine pulling from your purse for a hey-presto transformation. Functionality has always been a breeze for McCartney. It was a kick to see her introducing some purely fashionable form.