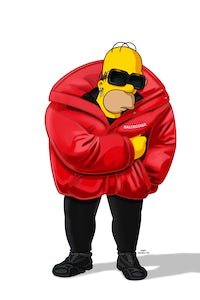 Paris, France — Moving the dial… the expression is such neo-speak it would normally make me gag a little, but sitting in the Théâtre de Chatelet on Saturday night after a screening which compelled me to absorb the fact that Demna Gvasalia had persuaded Matt Groening and his team to create an episode of “The Simpsons” in which Demna travelled to Springfield to cast its citizens in a Balenciaga show in Paris, I definitely felt like there’d been some kind of realignment in the cosmos, Mercury in retrograde be damned.

Gvasalia is a deep thinker. After everything we’ve been through, runway shows still feel wrong to him (that watershed couture collection in July was something else altogether). Still, he needed a pretext to show his new collection, a reason for people to have fun, a few drinks, maybe a dance. “The Simpsons” offered him that reason. He’d been watching the show since he was 10 years old. When he met Loïck (aka BFRND), the man he would marry, five years ago, Loïck had a Homer tattoo on his arm. It was instant kismet. Now this is the bit where he is Demna Gvasalia and you’re not. He wrote an email to Matt Groening. “My whole life depends on you guys, ‘The Simpsons’ inspired me to be who I am.” Obviously, he’d never done anything like that in his life. Astonishingly, Groening and co. wrote back. “OK, we get what you guys do conceptually.” And it was all about the concept, says Gvasalia. “It was not about fashion because I don’t think they’re into destroyed sweatpants.”

So the Simpsons team wrote a script, Gvasalia adjusted the ending (Homer catches on fire, Demna wanted Anna Wintour to spray him with champagne to save him, that’s not quite what happens in the final version), and the collaboration yielded one of the funniest, most charming episodes of “The Simpsons” in years. Except it’s not a full episode, more a short film. And it reinforces the Balenciaga brand in ways that Demna never anticipated. Like the sequence where Homer wrestles with the correct pronunciation of the name (echoes of Nomi Malone and Ver-sayce in “Dreamgirls”), or the Acme-like reiteration of the brand name on every product that appears on screen (though Gvasalia insists that was nothing to do with Balenciaga, everything to do with Simpson). 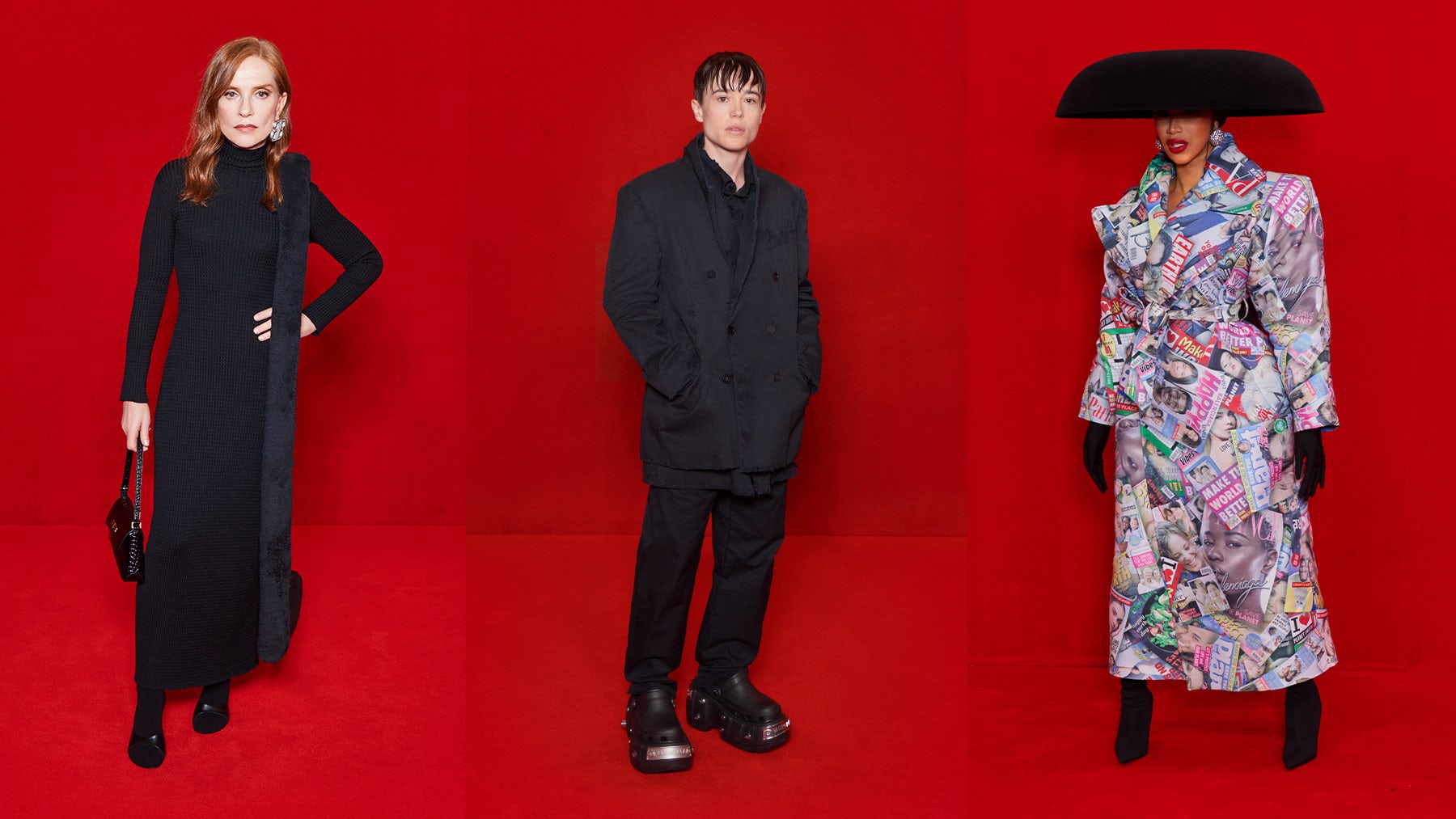 Isa Huppert, Eliot Page and Cardi B in looks from Balenciaga. Balenciaga.

Fact is, Demna has made Balenciaga a brand whose weight is so significant it can be cartoonised without losing any of its oomph. He revamped his new collection’s special evening as a red carpet event. Looks 1 through 64 were integrated into the arrival of guests on the red carpet, and the whole shebang was projected into the auditorium as we took our seats, like a major premiere or awards show. It was a genius subversion of a tired contemporary cliché. But that’s the kind of thing that Gvasalia excels at. He pares things back to a confrontational essence, rubs your face in transcendent ordinariness. His red carpet with its cast of celebrities — Cardi B to Elliot Page to Isabelle Huppert to Naomi Campbell — and local heroes (a huge roar for the bearded guy with the heavy eye makeup) was utterly Warholian in its explicit faith that everyone is a star. 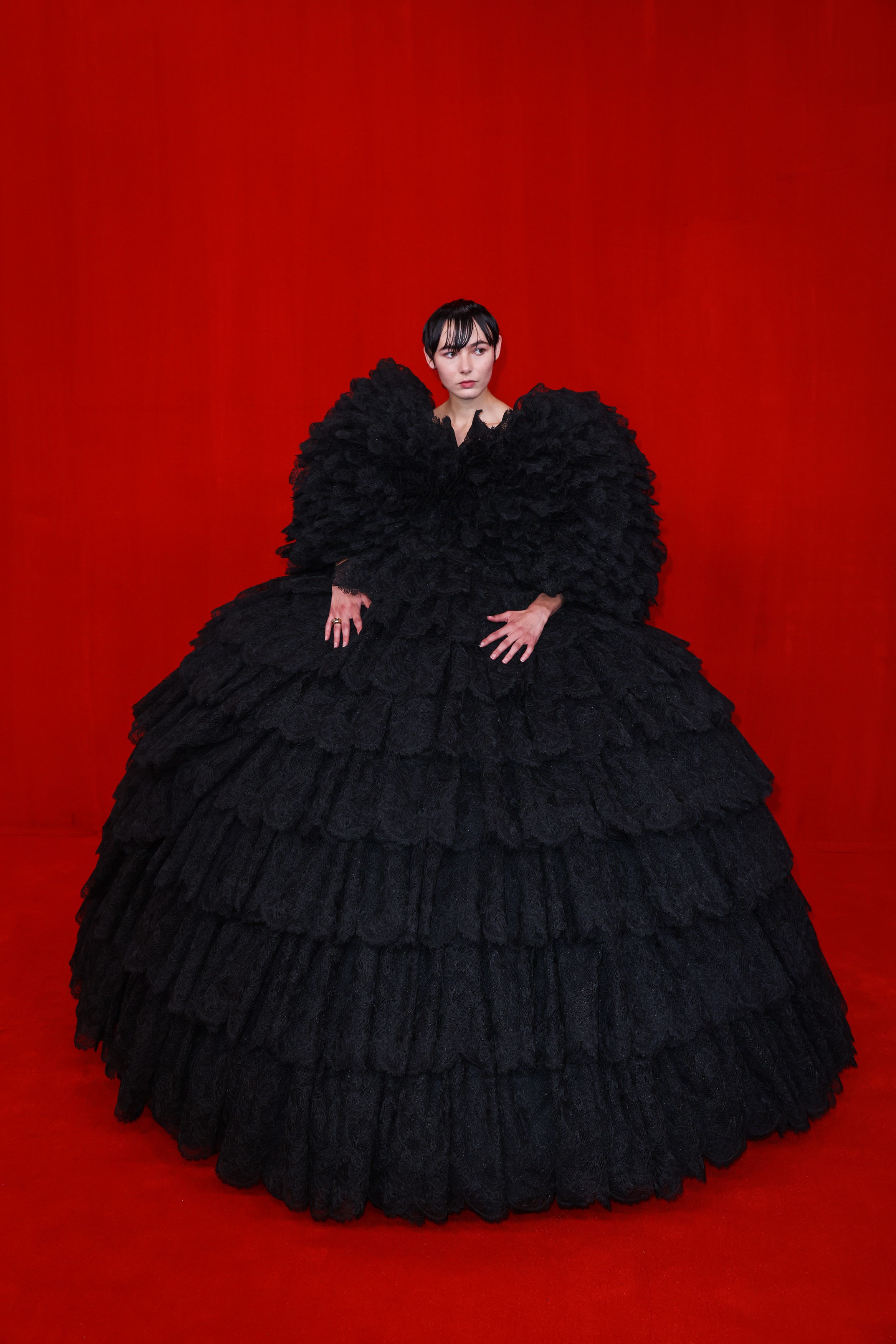 That’s also why the clothes he showed as a prelude to the premiere of his Balenciaga/Simpsons wonderment were like a consummate Dictionary of Demna. The exaggerated shoulders, the logofication, the hoodies and all-consuming flares, the distressed denim, the doubled dress, the industrial crocs … all of this is so vernacular now that it’s almost like folk costumes. The new ingredients were the couture tropes: a Scarlett O’Hara hoop skirt, black lamé with the light-absorbing properties of tar, a sweeping train of silver lamé.

It was a glorious thing. The applause was thunderous. “Did it make you laugh?” Gvasalia was asking on the way out. “I wanted you to be happy.” It did. We were.

Demna Gvasalia: ‘Couture Is The Most Sustainable Way of Consuming’