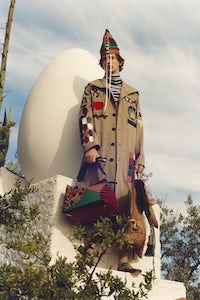 PARIS, France — “I’ve always had trouble with shorts,” said Jonathan Anderson as he walked around the Loewe installation on Thursday morning. “I guess I’ve come to terms with them.” Which was a mild understatement. His new collection was obsessed not just with leg-baring but with flashing flesh generally. “I felt like showing lots of it,” Anderson went on. “The clothes are definitely more sexualized.”

But it was a very particular sexuality that was being presented – the short shorts, the ribbed tanks, the scooped necklines and extraordinary bathing suits were Tadzio in Death in Venice, more shy ingénue than testeronic stud muffin. In the same delicate vein, one of the most alluring items in the collection was a suit with ribbed waistline in jacket and pants. It came in the most fetching shade of lilac (which, as things currently stand, might be the colour of the season for men).

Anderson was insistent that we mustn’t read too much into what we were seeing. But how can you walk into the environment that Parisian design team M+M create for Loewe each season without being provoked into furious conjecture? For Spring 2018, the inspiration was the rooftop of Salvador Dali’s house in Cadaques. That was Anderson’s latest idiosyncratic spin on Loewe’s aristocratic Spanish heritage. The set was airy, colourful and accessorised with a tiny mimosa-like perennial that Dali was apparently fond of. And maybe there was something of Catalonia in the artisanal linen shirts, the striped tunic with the tapestry neckline, the footwear and the bags.

But Dali was also a spectacular fabulist, and that was the only excuse Anderson needed to concoct a scenario that involved the following survivors of a shipwreck: a “sailor babe” (his words), a thuggy pirate, an ethnic pilgrim, an individual “in search of Namaste,” and a schoolboy. That sounded like an average Saturday night round the Dali dinner table. And for the designer, it provided an opportunity to do what he does best: let randomness rule.

“I’m into low tech, hyper normal things,” he warned. Which, in his world, meant anything from an eminently desirable safari jacket and matching jeans in natural suede, to a navy jumper with sailor buttons, to bondage pants in a classic William Morris oak leaf jacquard, to a naive Jolly Roger motif stitched on a t-shirt, to a steady rain of decorative accessories: seahorse and crab keyrings, tiny baskets dangling from belts, pointy peasant hats, a leather baseball cap with a “fur” tail.

There were two pieces which felt truest to Anderson’s integration of his life in the worlds of fashion and art. The first was a simple raffia basket, the kind Dali’s housekeeper would have carried to market. The second was a striped, rumpled linen shirt with a plastic “souvenir” pocket, to be used for a leaf, a shell, a fragment of a photo, anything that seals a moment. Both pieces were so simple, so raw, so "real" that they transcended fashion. They felt good.