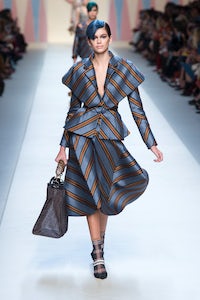 MILAN, Italy — Karl Lagerfeld’s futurist tendencies have always been evident, in everything from the collections he has designed under his own name to his love of Fritz Lang’s Metropolis. But it’s in his work for Fendi that he’s been able to explore his most arcane designs on the future.

Maybe that’s because the house of Fendi is based in Rome, a city where one of humankind’s defining civilisations rose and fell. That makes whatever comes next take on a particular, peculiar resonance. And that was certainly the case with Futurism, an early 20th century art movement in Italy, which embraced and celebrated the dislocating speed and chaotic change of the machine age.

The linear angularity of the new Fendi collection, a symphony of triangles, chevrons and stripes, was a spectacular expression of Karl the Futurist, from Kaia Gerber’s opening look – the extended triangle of a fichu topping the equally triangular flare of a skirt – to the Constructivist grid that defined Binx Walton’s outfit at show’s end. But the lines also gave way to lyricism, with the clotted floral motifs based on paintings by Futurist stalwart Giacomo Balla, printed on a sheer organza blouse, or heat-pressed onto a leather coat dress.

If this last item testified to the extraordinary craft of the Fendi ateliers, the collection wasn’t one to make a fuss about its artfulness. It was, in fact, remarkably straightforward. The show- notes made a connection to the Caribbean, head-scratching unless you thought the leafy broderie anglaise that trimmed cotton skirts had a hint of the Islands.

But there was actually something so sheer and airy about many of the clothes that you could imagine a scribe being carried away to sunnier climes. And, for the rest, there was always movement, as the Futurists would have insisted. Shoulders and waists featured cut-outs, an aerodynamic paring back. Skirts streamed with ribbons, moving. A white linen shirt fluttered with flowers made of feathers. It’s not always that you can say a Fendi collection was beautiful, but this one made that particular grade.