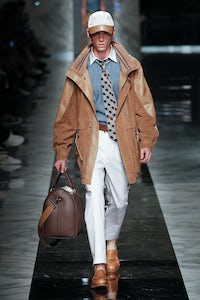 MILAN, Italy —  When the notion of the New Normal seeped into pop culture several years back as one way to describe the speed at which the Old Normal was being superseded, it would scarcely have struck Silvia Venturini Fendi as anything out of the ordinary. That's how she rolls. She insists she loves normality, but she could never settle for the normalness of it.

Like this: the lead in Fendi’s latest men’s collection was taken by The Businessman, a conventionally ordinary character. Silvia’s moodboard featured the utter banality of Martin Parr’s vernacular photography (taken from his series "Common Sense"), but alongside Parr’s pics of cups of tea and fried eggs and sunburned English skin was a screengrab of Christian Bale in "American Psycho" and a snap of Danny Dyer in "The Business." Unconventional “businessmen” to say the least.

And in the middle of them all, Andy Warhol, giving us executive realness in banker’s stripes and tie with the full maquillage and blonde wig of a bad Marlene Dietrich impersonator. Warhol has been called the patron saint of a lot of things but that image was, to Silvia, the face of the New Normal in the executive suite.

The set looked like the marbled lobby of an office building (Fendi’s Roman HQ), the models entered through an elevator or, for the finale, through the turnstiles that are now prerequisites for corporate security. The clothes, on the other hand, were more Warhol than Wall Street in their typically-Fendi integration of polar opposites.

Bearing in mind that billionaires are now as likely to be millennials as old school masters of the universe, Silvia enveloped obvious emblems of that old corporate life – ties, suspenders, a “nice” blazer and pleated pant – in much sportier stuff, like shorts and baseball jackets. Then she added her own twisted twist: fabulous organza jackets and coats, a mink jacket that my fevered imagination pictured on “Little Edie” Beale.

As I wrote that word “millennial," I felt sure that if I actually was one, my individual, intelligent “I” would already resent being turned into a predictable drone on a monolithic marketing platform. Youth is not an invention. But I did kind of like Silvia Fendi’s rationale for the “youthier” elements in her collection. When you’re on Skype, people only see your top half, so that’s where the effort goes.The bottom you can get away with murder. Same with the formal footwear-cum-slingbacks that were the show’s shoes. People see only the toe, never the heel. There’s a certain liberating subversion in that train of thought.

And Silvia’s ability to rationalize in a very convincing way also extended to the graphic element of the collection. From “Little Edie” to “Big Sue” Tilley: friend to Leigh Bowery, muse to Lucien Freud (whose portrait of her fetched a price at auction that was momentarily the most ever paid for a piece of contemporary art) and, now, artist-in-residence for Fendi’s Spring 2018 collection for men.

Introduced by Fendi stylist Julian Gano, Silvia was enraptured by Tilley, a woman who spent decades pushing paper as a civil servant in London while she lived an after-hours life on the bleeding edge of London’s art avant-garde. Banality and provocation – no more accurate summation of this collection’s new Normal. Tilley’s graphics — produced as designs on silk shirts, or visuals on bags, or lapel pins — included a cup of tea (again!), a desk lamp, a telephone, a banana and a martini glass with a smear of lipstick.

All these things, Silvia insisted, could be found on an ordinary desk in an ordinary office. Quite what they were doing in the latest collection from a house whose name is a fashion byword for extraordinary craft in the service of utter luxury answers any questions you might have about how Fendi became one of the most mesmerising stories in Italian fashion — and why it stays that way.