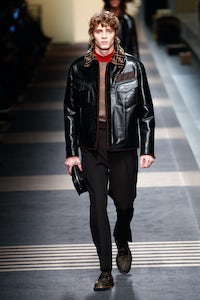 MILAN, Italy — Silvia Venturini Fendi loves airports: polyglot humanity, rich, poor, old, young, everyone on their way somewhere else. And whenever she’s on her way, she’s always dreaming of another destination. It’s a good mindset for a house like Fendi because Silvia’s restlessness means she’ll never buckle under the weight of legacy. And that gives her the confidence to take on tradition, just like she did with her menswear show on Monday afternoon.

When the first store opened in Rome in 1925, it bannered LUGGAGE, TRUNKS, UMBRELLAS. Travel first. Monday’s set was a luggage carousel on which revolved suitcases from the archive, along with Fendi-logo-ed bags of all shapes, sizes and definitions. There were also Fendi-labelled packages (almost felt like another Amazon reference). Silvia claimed she’d been thinking about the codes of the house, the FF logo, the stripes, the distinctive yellow that was a signature. A mix of old and new. And, yes, there were umbrellas, but they were mounted on the models’ heads. Is that what street vendors wore in "Blade Runner" to protect themselves from acid rain? That would be typical of the delight Silvia has always derived from toying with preconception. In the same off-kilter vein, the collection was dominated by diagonals: stripes of shearling on luxe coats, stripes of quilting on puffa jackets, shirts and ties trying to match, everything skewing sideways.

Her latest artist collaborator was Reilly, progenitor of Instagram sensation @hey_reilly, who was partially responsible for Silvia joining IG after he made one of his signature mash-ups using the Fendi logo. “I get along well with unusual people,” she said pointedly. “Reilly shares some values with us, like clever irony.” For this collection, he contributed a fierce, clotted collage, almost like a well-travelled suitcase plastered with decals. And plastered here, not just on bags, but on parkas and huge nomad coats for travelers on the dressier edge of civilization.

The collection was ultimately an upbeat celebration of Fendi, soundtracked by the sonic uplift of Michel Gaubert’s sampling of disco classics by Amanda Lear and the aptly named Voyage. FF was everywhere, lining a duffel, patterning a shearling blouson. And the double F no longer stood only for Fendi Fun. There was Fendi Free, Fancy, Fabulous, Faithful woven into knitwear. And Family too, given form in the plush baby carrier that made its way round the luggage carousel. That may well have been a nod to the fact that Silvia’s daughter Delfina is expecting twins any day now.

Silvia’s Fendi can give you a layer like that. The big picture here with the airport theme was Arrivals and Departures (CEO Pietro Beccari has headed off to Dior). And there are rumours swirling. “Give us a word, Silvia,” bayed the fashion press. She shot them a sphinx-like stare and, perfectly on message, said, “Nothing to declare.”