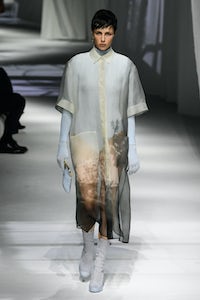 MILAN, Italy — The very cosy, intimate Fendi show — white linen curtains all around, the softest white sofas, shadowy projections of opened windows and vegetation and flying birds — was preceded by a press conference on Zoom. “Fashion is something serious,” said Silvia Venturini Fendi, not looking too serious. “And the future is built on the past, just like traditions are passed within a family, from one generation to the other”.

A physical show with digital introduction says a lot about this discombobulating moment. Oh, but the invitation was a box of Fendi pasta, so there was no mistaking the feel behind it all: home, as a family retreat, a safe place, a place of affection. Family has historically been central to the first wave of Italian business, and the second one too, and it has always been pivotal to Fendi. Indeed, family has remained part of the storied Roman brand’s narrative long after LVMH first acquired a majority stake in 2001.

Birthed from the five Fendi sisters who transformed a leather-making atelier to global success, but an element of coziness remained in the vision of Silvia Venturini Fendi. In her last solo outing in the driving seat of Fendi’s womenswear — her lovely menswear on show, too — the collection was voluptuously, gloriously familiar. Familiar as in family: Sunday lunches looking at the garden, and beloved bed linens passed from a generation to the other. A family where women take the lead, because after all, Fendi, remains a proud matriarchy. Mothers and daughters hold the power; they look fierce; they give life. Men, no matter how sharply and nonchalantly dressed, never look too grown up. They are sons. That’s the problem of modern masculinity anyway.

But let’s not digress. Venturini has a wonderful touch with her womenswear, at once stern and sinuous, and wonderfully crafty. Everything was shapely and light. The stellar cast of models of all ages and body types, including a radiant Penelope Tree, elevated everything. These are clothes that, quite simply, make women look beautiful.

There was a quintessentially Italian sense of sensuality to the proceedings. A Roman one, to be precise. As a sort of “farewell” Silvia left her mark on a high, highly personal note. Now it is Kim Jones’ turn to continue the tradition with his own interpretation.