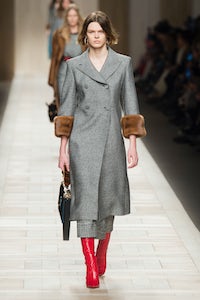 MILAN, Italy — Fendi’s notes for the new season introduced us to “a cinematic character pacing the streets of Rome at dawn.” Something a little noir about such a notion, no?  The first look certainly did nothing to deny it. Cara Taylor wore a fitted herringbone coat with mink cuffs over a Prince of Wales check skirt falling to mid-calf.  But she was also wearing red patent leather boots. Proper shady lady bourgeois.

That accessory was attached to almost every other woman on the catwalk, regardless of whether she was covered up in a proper camel coat or bared by sheer tulle (where you could see that the boots ascended thighwards). A cinematic character? Perhaps an escapee from The Indiscreet Charm of the Bourgeoisie. Pino Donaggio’s swelling strings, originally underscoring Brian de Palma’s Body Double, were an acutely appropriate choice on soundtrackist Michel Gaubert’s part.

Propriety and raciness kept pace throughout the whole show. On one hand, there was a subtle emphasis on classical values. The set featured the FF logo rendered in wooden marquetry, a beautiful traditional craft and the backdrop reminded us of the year of the founding of the house in Roman numerals: MCMXXV.

The acanthus leaf, one of the most common decorative elements in Ancient Rome, was printed on cape-backed silk blouses. And Karl Lagerfeld looked back to one of his frequent inspirations, the late 19th century Arts and Crafts movement known as the Vienna Secession, all strong lines and sombre rigour.

But, on the other hand, there was the perverse undertow that tugged at Vienna as the 19th century turned into the 20th. Those boots spoke volumes. And the skirts slit high to show them off. And the shiny leather coatdresses. And the red patent pencil skirt. Or the last look, sheer black tulle embroidered with a spirograph of florals, overlaid with a severe pleated black skirt: sex and science.

You could apply that formula to a lot of Lagerfeld’s work over the years under his own label. Sex and science? Sensuality and severity? This felt like a collection that was very attuned to where Silvia Venturini Fendi sees her family business sitting right now.