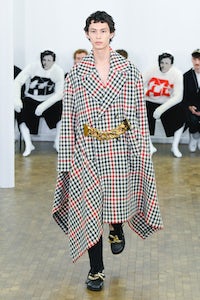 PARIS, France — JW Anderson’s front row was peopled with mannequins wearing masks of poet Arthur Rimbaud’s face. Anderson was referencing the work of artist/activist David Wojnarowicz who, like his peers Jean-Michel Basquiat and Keith Haring, has become increasingly renowned since his death in 1992. Rimbaud’s image was as iconic for the obsessed Wojnarowicz as Marilyn’s was for Warhol. And now, it was illuminating Anderson’s own obsession with Wojnarowicz’s work. The circularity was enthralling, if that’s the sort of thing you’re into.

But it actually tied into the collection in an abstract way. “Last year, we had an orgy of products heading into the show, something like 2000,” Anderson explained. “This year, instead of having 15 coats, we have one coat and we built 15 looks from it. So it feels like it’s always been there. Like Rimbaud’s face. Like Marilyn’s face. Always there.” The coat in question was a cape-ish, poncho-like situation. Anderson showed it every which way from classic check to quilted paisley, and he was absolutely right. By show’s end, it felt like it had always been there, so accustomed had your eye become to it. It wasn’t quite the same with the lithe knits that burst forth into a plissé peplum at the waist, but they certainly backed up Anderson’s declaration that he’d been focusing on silhouettes this season. There’s also not much chance you’ll be seeing anything similar on any other runways this men’s season, which underscores another fact: Anderson might be the most sui generis designer working today.

Take that full-length shift shape he favours. For sure, it’s non-binary in its effect — spectacularly so with the last look, all black with one single flowing sleeve in red, like an evening dress for Georgia O’Keeffe. From another angle, it was abbey-worthy for a monk’s retreat. Flesh and spirit — Anderson juggles them throughout his work, as do the artists and craftsmen he is drawn to.

He also has a good old sense of humour too. The tiny chains you might see on capes were exploded here into clunking great links. They were on the slip-on loafers too, like Brobdingnagian snaffles. When Anderson paired these shoes with a mohair tartan sweater and voluminous camel culottes, I was getting Miss Jean Brodie on K. A similar suggestion of the surreal came into play in pleated sweaters trimmed with big pearls. There is always something atavistic about Anderson’s work. Have you seen this effect before in a Renaissance painting or an old movie or a dream? You're never sure.

If the associations occasionally bewildered-par for the course with Anderson — there was an impressive seriousness of purpose in both collection and show. He showed a sweater knitted with Wojnarowicz’s Burning House artwork, sales of which will help Visual AIDS support HIV+ artists. A tape of Wojnarowicz speaking about living with AIDS played as the audience arrived, and the soundtrack by multimedia British artist Vicki Bennett featured a collage of brutally truncated love songs: Lionel Richie’s Hello, Close to You by the Carpenters, Carly Simon’s Nobody Does it Better and so on. It was a poignant reminder of all the love stories that were cruelly terminated by the AIDS holocaust. And it goes on still. Anderson made the point that, as much as AIDS felt like the end of the world to Wojnarowicz and his circle, it wasn’t. As questions were asked, answers were eventually found. But in that dark moment, the voice that Wojnarowicz found for himself continues to inspire Anderson. “You have to have creativity before you have a political voice. You have to keep producing to move forward.”