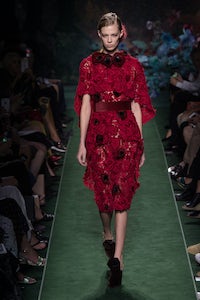 PARIS, France — In 2015, when Karl Lagerfeld last showed his Haute Fourrure collection for Fendi at the Theatre des Champs-Elysees, the iconoclastic spirit of Stravinsky’s "Rite of Spring" hung heavy in the auditorium. You could imagine the provoking scandals of other more delicately tuned eras exerting a huge appeal for Lagerfeld. And so he went there again on Wednesday night, as the opening strains of Claude Debussy’s "L’Apres Midi d’un Faune," another Ballets Russes-induced furore, leaked into the theatre.

Is it so hard to re-conceptualise Lagerfeld as a 21st century Diaghilev, a maestro of popular culture hungry to orchestrate new aesthetic outrages? There was no PETA picket this time, though there was certainly the fur to inflame their sensibilities. But the Fendi ateliers worked their usual fiendish magic so the suffering of a million tiny creatures was transmuted into works of artisanal art. A cape-dress composed of a pixellation of ten thousand mink lozenges won the award for most compulsive creation of the night. The blue poppies that drifted across a dozen other pieces underscored the essence of the collection, utterly detached from quotidian reality.

Silvia Fendi’s own commitment to finding viable alternatives to fur as it is currently farmed and used could well shift conventional perspectives at some point. Grow it in a lab? That’s the kind of techno dream that Fendi has already proved itself perfectly capable of dreaming. So you had to wonder whether Lagerfeld’s floral fantasia anticipated such a change, when one of the collection’s dominant motifs was a tulip-shaped chrysalis, harbinger of new life.