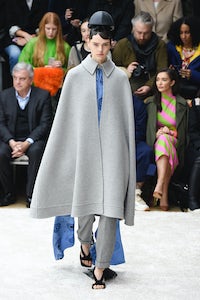 LONDON, United Kingdom — For the set of his new show, Jonathan Anderson claimed inspiration from “Quad,” something the gigantic Irish brainiac Samuel Beckett conceptualised for the BBC. “I liked the square format, you could see the garment from different angles.”

So far, so dry, though it isn’t really in Anderson’s nature to linger in the cerebrum. He carpeted his square with deep-piled broadloom and studded it with rocks, a simulacrum of Kyoto’s most famous Zen garden, where 19 rocks are precisely placed in sand. But Anderson was also in love with the idea that the carpet was cloud-cover, through which the rocks were poking like Himalayan peaks. Run with that idea. The notion that everything you see is subject to massive, intensely personal re-interpretation loans an appropriately trippy connotation to any Anderson collection (and that includes Loewe).

His collection certainly offered a banquet of food for thought. Jockey’s caps and capes suggested riding. Marcelled hair and boxy 2-D silhouettes had a cabaret flair. The flaring multi-coloured scarf-points of one dress evoked the magician’s niece. Another tubular confection was laced with hawsers of chiffon, like a giant had tried something with a huge needle. It’s such odd little fantasy flourishes that loan Anderson’s collections their quirk. It’s where his love of craft finds fullest expression. At the same time, he was savvy enough to offer exploded paisley knits matched to voluminous gabardine trousers that had the front row going up in foam and thunder.

In that Zen garden in Kyoto, said Anderson, you can only ever see 18 of the 19 rocks. There is always something missing, and that’s what makes it perfect. What was missing from his own collection? It’s an interesting question because Anderson is extremely adept at injecting mystery into his shows. Why did models walk with streams of tulle flowing from their pant hems? He said ankles are seductive. OK. The equally intriguing proposition is that Anderson is working some fine line between purity and provocation. “Awkward elegance,” he called it. It's irresistible, even if it demands a lot of its wearer. But hey, so do designers like Miuccia Prada and Rei Kawakubo.