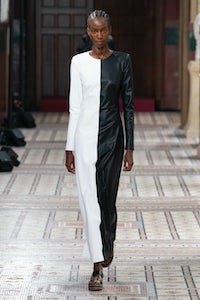 PARIS, France — “A friend told me I am good at neutrals but not at colour,” recounted Gabriela Hearst on a Zoom call a day ahead of her show, this season staged in Paris for the first time. “But if you say something like that to me, I am the kind of person who’ll work harder and hardest to prove you wrong. I am stubborn.” Hearst’s stubbornness delivered results: colour was the highlight of the IRL show. “I am not making plans too far ahead, so I don’t know if the move to Paris will be a permanent one,” added Hearst, a tomboy-ish bundle of womanly energy. “As for the moment, I enjoy the opportunity to play in such an intimidating fashion capital. It’s like being at the Olympics.”

Held in the courtyards of the École des Beaux-Arts, the show was quintessentially Hearst in the mix of pure lines, beautiful materials — either repurposed or deadstock, environmantal awareness being a key pillar of the label — and that pervading use of craft that gives her purist vision warmth and humanity. It’s this combination that makes Hearst interesting: soulful simplicity. And the collection was mostly black and white until, suddenly, almost psychedelic bursts of colour popped in, bringing the action to a crescendo.

In a season that has been mostly about touch — the sense that’s most denied at present, and yet fundamental to clothing — Hearst delivered a calm and personal take on the matter. The creative process started with a shell bracelet Hearst received from her grandmother, and shells featured both as embroideries and as inspiration for the coiling ajour lines and leather ribbon details on long dresses and skirts. It looked delicious. And yet it was the knotted motifs that caught the eye more than anything, capturing a gesture of the hand in an effortless, soulful line. Simple and effective.