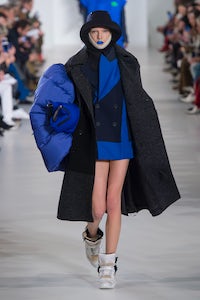 PARIS, France — John Galliano loves the word décortiqué to describe his fascination at Maison Margiela with shelling garments to a bare skeleton of structure. In his previous incarnation, there was another French adjective he was partial to: bouleversé, meaning shaken, upended… That fundamental thing still applies to his work at Margiela. Dressing in reverse, dressing in haste, unconscious glamour, all these notions convey the surreal randomness that shapes and unshapes his collections. Imagine an extra-terrestrial trying to understand the codes of Western dress – menswear, womenswear, daywear, eveningwear – when all it has at its disposal is a pile of undifferentiated garments. It doesn’t know the coat goes over, not under the dress. Or the knit vest goes under, not over the blazer.

Maybe that ET analogy only occurred to me because Slim Whitman was singing “Indian Love Call” on the soundtrack of the Margiela show on Wednesday morning, and that song was the secret weapon against the aliens in “Mars Attacks”. But since the Artisanal show in January, Galliano’s interpretation of Margiela has acquired a sci-fi gloss, with the iridescent foiling, the fabrics that respond to camera flashes, the polyurethane trapping feathers, fringes, fine couture fabrics, emblems of high fashion culture, in a look-but-can't-touch shroud. Technology, fragility and emotion meet in a spectacularly strange union.

As in January, a number of the clothes on Wednesday’s catwalk seemed to have a ghostly other life. The way the bare bones of a fringed rodeo jacket caged a black nylon coat, for instance, or a huge fisherman’s sweater crashed into a tweed blazer, or cable knit crept up the sleeves of another tweed jacket was a technical feat but, on another plane, it was a disorienting infestation of the irrational. Still, in the same way that poisonous plants in nature are rumoured to have their antidote growing nearby, Galliano wove a strong protective subtext into his collection: helmets and mouthguards, waterproofs, big, squidgy, shock-absorbing bags, huge parkas, hazmat yellow clean-up suits, and the SMS, the Security Margiela Sneaker. SMS was old text message terminology. In Galliano’s world, the difficult past is trying to message an uncertain future.