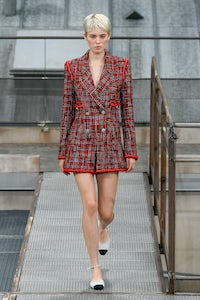 PARIS, France — Virginie Viard hasn’t yet taken to those intimate post-Chanel-show debriefs favoured by Karl Lagerfeld. When she appears on the catwalk in t-shirt and jeans, you get the feeling she’s quite happy to let her work do the talking for her, and confident that it does. She’s not wrong. As with her couture debut in July, it was confidence that characterised the collection — her first ready-to-wear outing for the brand — she presented on Tuesday.

Everything suggested business as usual. The Grand Palais was filled with a typically huge set, this time, the rooftops of Rue Cambon. The show itself ran to a substantial 84 looks. But instead of the traditional press folder on every seat, stocked with Lagerfeld’s photos of his new designs, there was a huge poster printed with Benoit Peverelli’s images of the collection. Viard claimed the rooftops of Paris reminded her of French cinema’s New Wave in the 60s. Posters were big in the 60s too. And the model looked like a young Anouk Aimée, a screen icon of that era, and a particular favourite of Coco’s.

Maybe the 60s connection is a stretch, but Viard’s take on Chanel had the coltishness of Coco in a more gamine incarnation, helped along by the hats, the flat shoes, Sam McKnight’s shiny, happy hair and Michel Gaubert's gently grooving soundtrack. The classic tweed blazer was reconfigured as a playsuit. There were a lot of them. There were short shorts too, in silver leather with a monochrome tweed jacket, or pearlized pink with a raffia-fringed top. Viard kept it young with bermudas, hotpants, sundresses and high-waisted skating skirts, but, strikingly, she also kept it simple: minimal accessories, and a colour palette that wasn’t much more than black, white, pink and navy. The letters in CHANEL were enlarged and abstracted to create a skyline print. It was a smartly graphic alternative to interlocking CC’s as a way to underscore the brand name. Maybe even a reminder that the brand was built by a woman, and now there is another woman in charge. But I'm not getting the sense that a major shift is on its way. This collection mightn’t have had the elegance of Viard’s couture, but it did share its restraint. That suggests a strong, stable future.