It was an atmospheric show with a powerful message, yet it’s easy to question the place of clothes like Pugh’s. 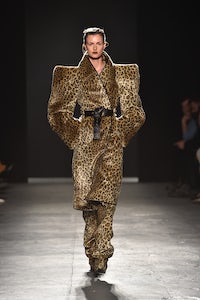 It was an atmospheric show with a powerful message, yet it’s easy to question the place of clothes like Pugh’s.

LONDON, United Kingdom — Jacquetta Wheeler in leopard calf hair! Querelle Jansen in banker’s pinstripes! Gareth Pugh opened his Autumn/Winter 2018 show with some 2000s model star power and a deafening Roly Porter soundtrack that underlined his no-holds-barred approach to power dressing. He’s toyed with some pretty camp territory of late, and it seems the aspect of costume has not entirely left the building, however today he tempered that back into a dark riposte to the swirling storm of harassment and equality issues facing women today. Pugh’s answer was the ‘demolition silhouette’, an unapologetically stiff and structured uniform of giant pagoda-shouldered tailoring mixed through with constructed or draped bodices.

He underpinned the above with paper bag waist pants or blackened silver cuissard boots, creating an all-over armour that, along with leather barbed wire jewellery, a Hellraiser nail helmet, and Val Garland’s gun-powder makeup effects, lent these ladies the fearsome air of stepping off a veritable fashion battlefield. It was an atmospheric show with a powerful message, yet it’s easy to question the place of clothes like Pugh’s in a time where fashion’s barometer seems divided into two predicated camps (let’s call them streetwear and maximalism, to cut a long story short).

His fit into neither, however stripped of his warrior’s accoutrements, there were desirable options peppered through this offering. Done in black satin, his trench-belted flares could see a second life beyond the catwalk, as could the oversized blazers and kimono coats piped in leather. Perhaps front row guests like Nick Knight and Daphne Guinness might vouch for the rest?