The show felt unsettling in a good way — bleak in its outlook and sharply in tune with how many of us feel about the near future, it struck a chord close to home. 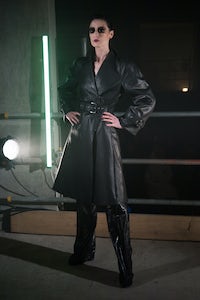 The show felt unsettling in a good way — bleak in its outlook and sharply in tune with how many of us feel about the near future, it struck a chord close to home.

LONDON, United Kingdom — Gareth Pugh took his audience to the depths of the earth last night. By that, we mean a cavernous building site in Islington, a handful of levels beneath ground level, filled with enough moggy dust to result in a mass asthma attack.

Diehard fans of Pugh’s macabre theatricality, such as Michele Lamy and Die Antwoord’s Yolandi Visser, were present. Something about the whole thing felt monumental, and it soon transpired that Pugh was keen to make a decidedly political statement with President Trump, explicitly named and shamed, in mind. “It’s like that moment in Cabaret — “In here, life is beautiful!” — as outside the world burns,” read the show notes. “Do you look it in the eye, or do you look away? That’s the critical question.”

The question was difficult to answer for Pugh. On one hand, his all-black collection of severely tailored, hard-edged clothes felt like what the bad guys would wear in a dystopian future, yet he was reluctant to talk about the clothes themselves in relation to his intent.

There were clear Night Porter references and plenty of very high-waisted trousers and cinched-within-an-inch-of-your-life waists on jackets and coats; there were also riot shield-like shapes that had the texture of bullet proof vests, and yeti faux-fur that looked somewhat inexpensive and out of place – and also too literal; winter is coming, we get it. Stronger looks included the shiny plastic-looking capes and coats that billowed with lightness and theatricality even with slow motion.

During the show, the models, activists and artists who stalked through the concrete space had their eyes covered by globular bug-eye lenses that rendered the eye of any white and appeared as though their organs, quite essential ones in understanding the world, had been hollowed out. Yet, the designer spoke about “staying awake to stay woke”. Was this what happens if we stay awake for too long, like one of the victims that the U.S. President recently said the government had every right to torture? Or was it what happens when you look away, turning a wilfully blind eye to the bloodlust and obscenity surrounding you? That’s for the wearer to decide.

The music, too, was maddening — a mash-up of samples and screaming that also had a torturous effect. It all felt unsettling — in a good way — for this was a show that was so bleak in its outlook and so sharply in tune with the way many of us feel about the near future, that it struck a chord that is sadly close to home. By drawing on radical extremism, Pugh highlighted how extremely ridiculous the world is at the moment. Whereas his theatrical shows can sometimes come off as campy, this was sincere articulation of the world right now – and, with worryingly increasing prospect, the future.