The designer took a walk on the wild side with an ode to Soho nightlife and the wild creatures that once prowled the scene. 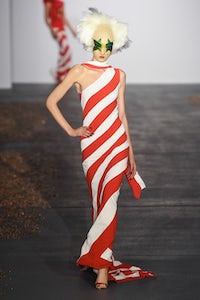 The designer took a walk on the wild side with an ode to Soho nightlife and the wild creatures that once prowled the scene.

LONDON, United Kingdom — Set in London Fashion Week's new home in Brewer Street car park, Gareth Pugh's spring show was an ode to Soho nightlife and the wild creatures of the night that prowled the scene before rapid gentrification began reconfiguring the neighbourhood. "It was like falling down the rabbit hole. There were such feelings of euphoria, of danger and of possibility. I guess that's what this collection is about," said Pugh, setting the stage for what the show notes dubbed "a battle royale between the drag queens and the developers."

Working only with red, white and black — and real copper coins made into a kind of chain mail — the silhouette was slim but not straight. Large bows and big collars of the sort Christian Dior loved in the 1950s, latex and towering hair were all were crucial elements of the look, as was the makeup, featuring extraordinary eye treatments rendered on fetishist gimp masks.

The whole effect was not only empowering but also intimidating — an approach to femininity totally appropriate on the day of the announcement of the death of novelist Jackie Collins, who knew more than a little about the power of the fictional bitch woman.And, as always with Pugh, there was delicacy and experimentation. Semi-transparent coats in rubberised cotton were winners with great commercial potential, along with successful leather tabard tops.

It has become customary to call Gareth Pugh the wild card of London fashion. But having won the Andam Prize and come under the wing of Rick Owens and Michèle Lamy, he has learned that line, balance and shape are the essentials of fashion. And, in a way, he has become London's answer to Montana and Mugler, who virtually invented modern female sexuality with their collections. 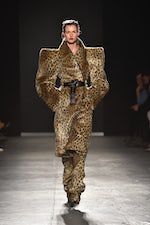 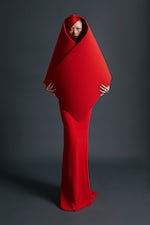 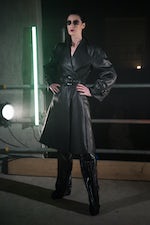 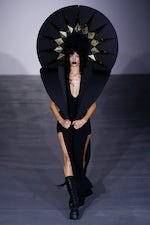 Gareth Pugh's Night After the Opera