Below the recycled Gaultier tropes was unmistakable evidence of the designer's finesse. 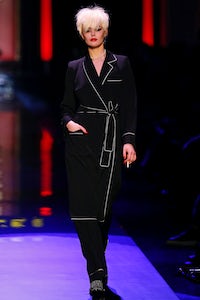 Below the recycled Gaultier tropes was unmistakable evidence of the designer's finesse.

PARIS, France — Jean-Paul Gaultier will never get rid of the enfant terrible label which was bestowed upon him in the 1980s. Nor will he ever shed the sense of liberated hedonism and escapism which were the defining trait of the era. The 'decade of excess' was, of course, also Gaultier's heyday. And the collection he showed in Paris today was the nth nostalgic ode to a time that will never be back, complete with Grace Jones on the soundtrack and a disco scenography in homage to Le Palace, Paris' shrine to debauched nightlife.

The show was filled with the theatrical tricks the designer loves so much. Models raided the catwalk as if they were exiting a nightclub, cigarette dangling from lips, all awkward poses and arrogant swagger. It added a layer of fun to the proceedings, but with more than sixty looks on show, it was also a bit distracting. What a pity, because below the drama was unmistakable evidence of Gaultier's finesse: he can cut a mean tuxedo and a lavish ballgown like nobody else.

The collection was filled with Gaultier's well known tropes: androgyny, irony, sexuality. A couple of dresses with a paillete patch on breasts and, erm, crotch should not have made it on to the catwalk. The loungewear was the best part, It looked light — both literally and metaphorically — and elegant. It was also a nicely bias way to approach the nightclubbing theme. 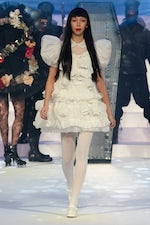 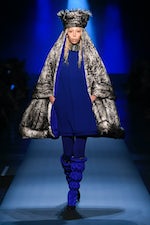 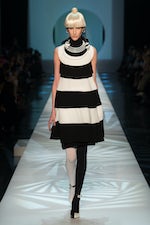 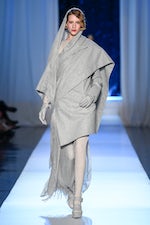