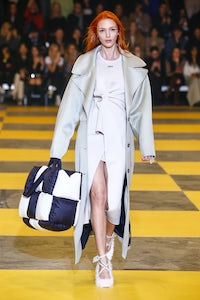 PARIS, France — As far as fashion inspirations go, the American pastime of demolition derbies is pretty arcane. It was definitely not part of Virgil Abloh’s growing up in Rockford, Illinois. But hey, if a designer mulches art and pop culture and shapes and textures long enough, maybe what emerges is this picture in his mind: the vivid checkerboard of the starter’s flag, the flash of flame-retardant fabrics as medics extract a driver from a blazing wreck, the car-crash crumples of John Chamberlain and Franz West sculptures. They were all eye-catching to a cultural omnivore like the young Abloh. “Ultimate accumulation,” he calls it. But how could he possibly know that at some point in his future he’d be spewing all those references onto a catwalk in Paris?

He patterned that catwalk in a yellow and grey checkerboard. He sent Adut Akech out in a floaty organza confection in the same pattern. The silver lining of jackets was flame-retardant. He said the pants were racecar pants (but not the glitter bows at their hem). The collection’s showpiece was surely a dramatic coat, beaded with the rear-vision rubric, THINGS ARE CLOSER THAN THEY APPEAR. Abloh said that was his mantra. He wasn’t letting the demolition derby go.

It was an extraordinary idée fixe. But Abloh is a genuine obsessive. A true believer. He said he loved womenswear for “its ability to show emotion through volume, shape and dressmaking.” He rhapsodized over the metres of fabric consumed by the dresses that Karlie and Gigi and Adut wore in the finale. He’s thrilled that Off-White is produced by the same factories in Italy that made Jil Sander’s clothes. Mesmerised by the techniques he is acquiring in his other job at Louis Vuitton. Soufflé pleating? Pardon my ignorance, but I never knew there was a specific name for the pieced mille-feuille effect that Abloh achieved with what looked to me like quilted coats.

“I have to get to the bottom of everything,” Abloh said during a preview on Wednesday. His sidekick Kevin was wearing a t-shirt that co-related the guys in Tommy Ton’s already-classic image of Kanye and Co. descending on Paris in 2009 to cartoon characters. Kanye was Mickey Mouse, Virgil was Goofy. He insists Off-White’s tailoring is now outselling its hoodies and sweats. Who's Goofy now?