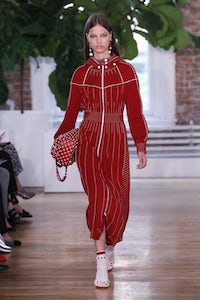 NEW YORK, United States —  Pierpaolo Piccioli loves Baz Luhrmann’s Netflix series “The Get Down,” which is set in the Bronx in the late 1970s at the intersection of the rise of hip hop and the decline of disco. He also loves New York, and has favoured showing his pre-collections in the city to a front-row only audience of 200 or so industry insiders for the past few years. While Valentino’s pre-collections certainly fall into the “event” category, with editors travelling from abroad in order to attend, as they do for Dior, Louis Vuitton and Gucci, he wants them to be less about an “exotic” location and more about “the fashion.”

“New York, for me, is a loft. You can feel the energy,” Piccioli said on Sunday afternoon in between fittings, sitting one floor above the exposed-brick space north of Soho where his latest collection would bow just two days later. He had been after this venue since last autumn, but it wasn’t ready in time for the pre-fall showing, which instead took place at the tin-ceilinged, meticulously tiled Beekman Hotel. Perhaps it was fate, given that this collection, with its references to street art and hip hop, needed to be shown in a raw, unadorned environment. There were a bounty of details and references to keep the eye busy. “It’s about diversity,” he said of the look.

Enter “The Get Down,” and hip hop, and a grab bag of details pulled from sport, artisan craftwork and the house’s own romantic codes, from high neck collars to gathered shoulder seams. Piccioli, who worked in tandem with creative partner Maria Grazia Chiuri for two decades up until four seasons ago when she decamped to Dior, is unafraid of athleticism, creating popular novelty items like trainers in the past. But it is the athleticism in his designs — his vigorous approach — that allowed him, in this collection, to take athletic tropes from that era and turn them into something more romantic: silk gym socks worn with heeled sandals, fly away track pants tailored like trousers, a thick bed of florals carpet-bag embroidered into a cropped fishnet top.

Consider the t-shirt dress pulled together at the waist with a drawstring. In green and white, the colours of tennis, it was elevated from the casual by its Valentino lace. Or the track jacket rendered in a shocking pink, embellished with a wavy topstitch and tucked into a deep knife-pleat skirt of the same colour — strips of red slicing through. Unlined leather anoraks and a letterman’s jacket — the former of which was signed “Valentino” in big bubble letters across the back — were let out at the waist for a swinging silhouette.

Army cottons were patchworked or heavily embroidered, a burlap utility bag roughly stamped with the house’s name in white paint. And there was the jewellery — turquoise-beaded earrings shaped like birds and geckos, knuckle rings that spelled out innocuous phrases. Models wore mink flip-flops and feather-covered trainers, and Piccioli once again collaborated with Zandra Rhodes, whose legendary lipstick print was scattered over dresses and jackets. He even managed to update the house’s ubiquitous rockstud, presenting it out in a rubbery white that refreshed each quilted bag and shower slide it bedecked.

The beautiful jumble was certainly “diverse,” and it once again underscored the humanity of Piccioli’s work. While Valentino has long been technically exquisite, this had a looseness to it that evoked a new energy. Not to mention dollar signs. For a brand that’s been on a commercial roll for nearly a decade, this stuff will certainly sell.

However, the line between cultural appropriation and misappropriation is sometimes difficult to discern. And, as last week’s controversy surrounding Chanel’s boomerang proved, any sort of perceived insensitivity toward a culture that is not one's own can have consequences. Valentino, too, has been called out for misappropriation in the past when styling its models in cornrows and using Native American beadwork. But this could have been a straight-up hip-hop collection, which might have been offensive to some — and, of course, boring.

Instead, Piccioli’s spectrum of references were grounded, funnily enough, in the classic romanticism of Valentino. Perhaps that’s why he kept referring to the collection as “untaggable;” that there was not one single culture to reference. He drove the idea home in the runway soundtrack, too. Instead of using sampling to mix disco and hip hop, Kendrick Lamar was patchworked with the classical dance-electronica of Ilya Beshevli. “I want the collection to be new, even if it’s known,” he said.

Of course, it’s impossible not to draw comparisons between Piccioli and Chiuri’s work at Dior; she just showed her own cruise collection a few weeks ago across the country in Los Angeles. They share so much language. But Piccioli has benefited from the opportunity to continue to tell the story he already knows so well, and in that way he has had a head start.