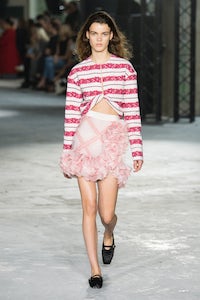 PARIS, France — Giambattista Valli's shows can often be taken for granted, in the sense that they contain an expected mix of elements: a grand location, a socialite-studded parterre and modern ladylike clothing shown on rail-thin models in impossibly high heels. You get the picture. Today's show was happy departure from the formula. It's always good to see a creative step out of his or her comfort zone. In fact, with Valli, everything changed, save the stars in the audience, which this time included Madame Francois Pinault, aka Salma Hayek (Pinault bought a stake in the Valli company via Artemis earlier this year).

For the rest, it was all brand new. First, there was the venue: a dilapidated basement in a modern building on a boulevard almost out of town. Then, there were the ballerina flats worn throughout. But most of all, there were the clothes: light, fluttery, with a tad of graceful mischief. It's territories both Valentino and Miu Miu have charted in different ways, but Valli's take felt fresh. A few hours before the show, Valli posted a picture of the late Mario Schifano — the artist cum bon viveur — and his muse Nancy Ruspoli. The inspiration, however, played lightly in the background: a charming mix of the masculine and the feminine with an almost impalpable late-1960s/early-1970s vibe.