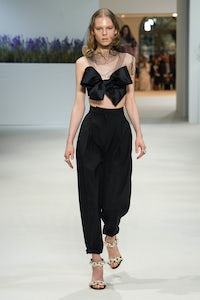 PARIS, France — A girl in a bra top and rolled-up, banana-shaped trousers, her face veiled by a net, her eyebrow marked by a scar. This is who opened the Giambattista Valli show today. She had many sisters on the white-carpeted catwalk, all looking just as fierce. Quite remarkable sights to behold, this being a haute couture show.

It was quite a shift in the aesthetic system of the designer, too.

Radiant and a tad naughty, Valli described the women as "ghetto girls." Ghetto in Valli's world, that's for sure. Although pervaded by a palpably youthful spirit, the collection did not make the slightest concession to the urban, streetwear winds that have swept fashion of late. Yet, it felt fresh, energetic and upbeat nonetheless.

As a designer, Valli has always been interested in the complexities and contrasts of womanhood, which he depicts in the juxtaposition of sharp silhouettes and flowery volumes. Today he tested new grounds: the flowery and fluttery got graphic — and the graphic got giddy. This being Valli, there were slightly dramatic numbers with a Cristobal Balenciaga feel to them, but it was the svelte silhouettes that stole the show.

Valli said the artist Francis Picabia, during his Dadaist phase, served as an inspiration, specifically his portraits of women and Dada's inherent proclivity for displacement. Ultimately, it was Valli's point of view on youthfulness that delivered the message. "Everybody obsesses over millennials, but what does that mean? Youth is a way of being, not a matter of age." Well said.