Giambattista Valli's knowledge of couture is encyclopaedic, but he never gets trapped in nostalgia. The collection was a lot, but it worked. 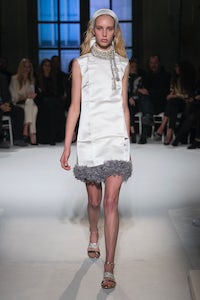 Giambattista Valli's knowledge of couture is encyclopaedic, but he never gets trapped in nostalgia. The collection was a lot, but it worked.

PARIS, France — "We are going to miss Franca," said Giambattista Valli, visibly moved, minutes before his show, held in the labyrithine, intensely wrought-out spaces of Paris' museum of the national archives, in the thick of the Marais. The whole system is going to miss a visionary, indeed: Sozzani passed away at a time when corporate powers are violently taking over creativity. In a way, the event marked the end of an era and the opening of even more blatantly commerce-driven, utterly unispired and non-inspiring times.

A Franca Sozzani lookalike opened the show: blond weavy hair held by a band, wearing a satin trapeze dress and an air of utter detachmant from her surroundings she glided lightly across the room. It was a heartfelt way to pay homage to a dear friend, and it was a charming way to open a show that journeyed across an eclectic collection of inspirations and stiles. Or, to put it in Valli's words, "a stroll in the mughal garden." The running thread were folding creases: dresses and tunics that looked like they just came out of a suitcase. In couture terms, it felt like a charming provocation that peppered an ever evolving detour across floaty silhouettes, frilly meringues and streamlined winks to the late sixties. It was a lot, but it worked. Giambattista Valli's knowledge of couture is encyclopaedic, but he never gets trapped in nostalgia. In his work theee is a sense of concision, a will to test different grounds that feels relevant for the moment. When he does streamlined, Valli is at his best, and this season he did a lot of that.